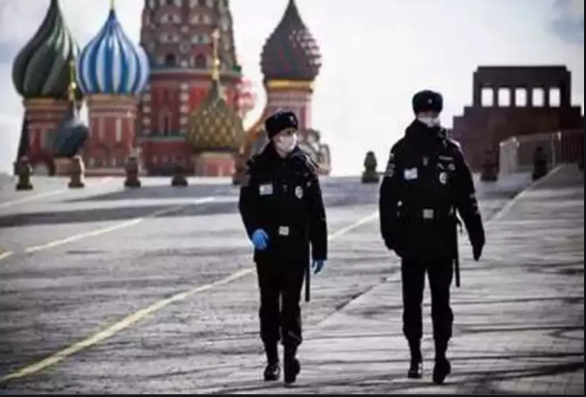 New Delhi: After China, it is Russia.

With a fresh outbreak of Covid-19 in the last few days, Russia braced to battle the pandemic’s fourth wave by shutting down for 11 days from October 28 all public places and educational institutions across the national capital Moscow as the country recorded the highest numbers of coronavirus infections and deaths since the pandemic began in January 2020.

The government reported 36,339 new infections and 1,036 deaths in 24 hours over the last weekend. That brought Russia’s death toll to 227,389, by far the highest in Europe, according to media reports on Friday.

President Vladimir Putin complained about Russians’ vaccine-hesitancy and urged them to get the shots at the earliest. “Why wait for the illness and its grave consequences?”

On Wednesday, he ordered Russians to stay off work from October 30 to November 7, including a four-day national holiday. Moscow Mayor Sergei Sobyanin also announced fresh restrictions in the capital, starting even earlier.

Officials have ordered all gyms, cinemas, entertainment venues, and most stores to close in Moscow from October 28 to November 7, along with kindergartens and schools. Restaurants and cafes may open for takeaways or delivery orders. Food stores and pharmacies will stay open.

Access to public places like museums, theaters, and concert halls will be limited to those carrying digital codes on their smartphones to prove vaccination or past illness. This practice will remain in place even after November 7.

Most state organizations and private businesses, except for those operating key infrastructure, will halt work in the 11-day nonworking period, Sobyanin added.

Unvaccinated people over 60 years of age will have to stay home except for brief walks and open-air exercises. Businesses will keep at least a third of their employees working remotely for three months starting October 25.

“The situation in Moscow is developing according to the worst-case scenario,” Sobyanin wrote on his blog, adding that the number of infections in the capital is nearing all-time highs.

Russia’s daily infections have been surging for weeks and mortality numbers topped 1,000 for the first time last weekend amid low vaccination rates, lax public attitudes toward taking precautions, and the government’s reluctance to tighten restrictions.

Only about 45 million Russians — roughly a third of its nearly 146 million people — have so far been fully vaccinated.

Ironically, Russia was the first country to allow a coronavirus vaccine, launching Sputnik V in August 2020, and has plentiful supplies. But citizens have been reluctant to get it.

President Putin, who got himself vaccinated with Sputnik V earlier this year, said vaccine-hesitancy bewildered him, as even his close friends kept delaying it.

“I can’t understand what’s going on,” Putin said on Wednesday. “We have a reliable and efficient vaccine. The vaccine really reduces the risks of illness, grave complications, and death.”

Part of the blame, the media reported, also went to the state-controlled Russian propaganda outlets which criticized foreign-made vaccines while extolling domestic ones. This strategy backfired as the common people suspected all vaccines. Many have ignored the mandate of masks and sanitization.

The fresh outbreak, therefore, is not surprising. President Putin also hinted that restrictions could be re-imposed on Saturday itself (October 23) in some regions where the situation is alarming.

Early last year, Russia had initially imposed a nationwide lockdown to control the pandemic but avoided it thereafter lest it hurt the economy and Putin’s popularity. Thereafter, Moscow instead allowed regional authorities to decide on local restrictions.

Many of Russia’s 85 regions already have restricted attendance at large public events and introduced digital codes for access to public places. Some have made vaccinations compulsory for certain public servants and people over 60.

But Moscow largely avoided such restrictions until now, and crowds frolicked everywhere. When the Cabinet proposed the fresh restrictions on Tuesday, many Russians rushed to book flights to Black Sea resorts to take advantage of the long break. They ignored officials urging them to not travel to other regions during the nonworking period and keep their infected relatives at home.

According to official reports, most of those who died recently were unvaccinated. Now, 87 percent of hospital beds allocated for Covid-19 patients are filled, with the number reaching 95 percent in some provinces.

Dr. Catherine Smallwood, the Covid-19 incident manager at the World Health Organization’s European branch, said vaccination levels at or below 30 percent in Russia and eastern European countries like Bulgaria and Romania were “particularly concerning.”

The government task force has registered over 8 million total infections and its official Covid-19 death toll ranks Russia as having the fifth-most pandemic deaths in the world, behind the United States, Brazil, India, and Mexico.

However, state statistics agency Rosstat, which also counts deaths in which they did not consider the virus the principal cause, has reported a much higher death toll — about 418,000 as of August.