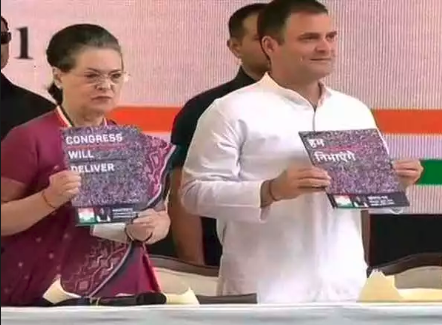 The Indian National Congress party today released its manifesto for the 2019 Lok Sabha elections which is to start from April 11. The manifesto was released in the presence of Congress president Rahul Gandhi, Sonia Gandhi and former Prime Minister Manmohan Singh. Priyanka Gandhi and other big leaders were also there.

Congress president Rahul Gandhi has been outlining the party’s agenda at election rallies and many of these are expected to be part of the manifesto including the much-hyped minimum income scheme.

Congress leader and manifesto committee chairman P Chidambaram said the contents of the manifesto are the millions of the voices that the party consulted for its constitution. “We could not accommodate all the voices given the limitations.  When this is released, you will find that there is enough in it to address the concerns of the farmers, youth, women, industries, minorities, healthcare, foreign policy, national security among others,” he added.

Wanted to show South India that Congress stands for them: Rahul Gandhi

On his decision to contest from Wayanad, Gandhi said, “There is a feeling of neglect in South India. I wanted to show them that Congress stands with them. As far as I can see, we have alliances with Left across the country and there is no problem on that ticket.”

“Under our government, farmers who cannot pay back loans, it will no more be a criminal offence. For education, we will have 6 per cent budget. In healthcare, we will strengthen public hospitals,” Rahul Gandhi said.

On National Security, Gandhi said, “Congress will strive and make the country one. We will focus on strengthening national security.”