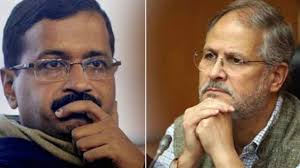 The touchy issue about being the regulator of bureaucracy had observed a split verdict by Supreme Court. The issue had been raised way back by Arvind Kejriwal, the chief minister of Delhi Government against the Lieutenant Governor of Delhi. On Thursday, it is observed that the LG of Delhi, Anil Baijlal and Aap Government, who were in a power tussle for control of services witnessed a spilt verdict by Supreme Court. Due to this, The National Capital Territory of Delhi is in tussle with center and Supreme Court has referred the matter to a larger bench.

A two-judge bench comprising Justices A K Sikri and Ashok Bhushan, however, agreed on their views on centre having control over the anti-corruption branch but had a difference of opinions on vesting power for services like electricity boards, land revenue matters and appointment of public prosecutors.  On Thursday, February 14, 2019, Twitter has been remarked with Aap’s quick reactions on the matter.

The court gave the Stamp Act, Electricity Board and Public Prosecutor to the Government of National Capital Territory of Delhi (GNCTD) and Commission of inquiry, ACB to the Centre. The NCT also got the ‘Revision of minimum rates of agricultural land’ but the Court said that the L-G can refer to President in this case.

In July 2018, a five-judge Constitution bench of the court had laid down broad parameters for governing the national capital, which has witnessed a battle for turf between the Centre and the Arvind Kejriwal government. The apex court had ruled that the Lieutenant Governor (L-G) has no “independent decision-making power” and that he has to take decisions on the advice of the Cabinet.

After this, on September 19, the Centre had told the apex court that administration of Delhi cannot be left to the Delhi government alone and emphasised that it has an “extraordinary” position by virtue of Delhi being the country’s capital. On the other hand, the Delhi government on October 4, told the apex court that it wanted its petitions relating to governance of the national capital be heard soon as it did not want “stalemate to continue in administration”. The bench had reserved its verdict in the case on November 1, 2018.

There are many reactions observed on Twitter for the tussle Aap is handling against Center.