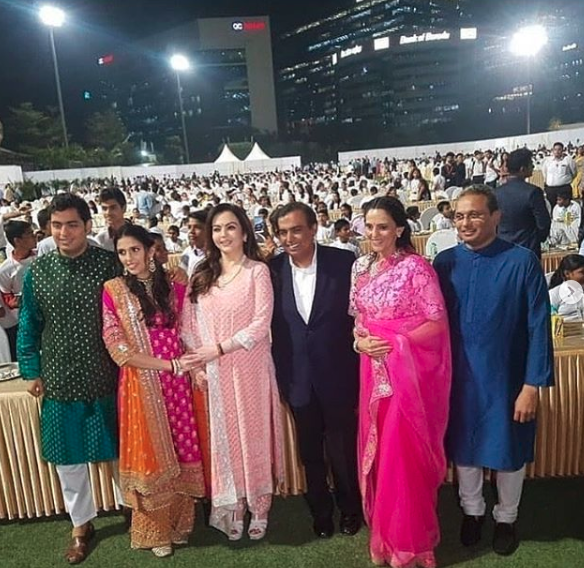 The grand Indian wedding all set, Akash Ambani to tie a knot with Shloka Mehta !

The grand Indian wedding all set, Akash Ambani to tie a knot with Shloka Mehta !

Akash Ambani, the elder son of India’s richest person Mukesh Ambani and Nita Ambani is all set to tie the knot with Shloka Mehta, the younger daughter of diamond merchant Russell Mehta and Mona Mehta today at the Trident Hotel followed by a dinner at the Jio World Centre in Bandra Kurla Complex. Although the marriage will happen today, their pre-wedding celebrations had already begun last month.

There were many Bollywood stars invited in the pre wedding party of Ambanis where Shloka was caught grooving with Amir Khan on the famous song Ae kya bolti tu.  Even at the wedding there are many VIP guests invited in the fat Indian wedding.

Shloka Mehta is daughter of diamantaire Russell and Mona Mehta. Antilla once again has been decorated to welcome Ambani’s daughter in law Shloka Mehta. The Baraat has already arrived at Trident BKC Mumbai which is preceded by high tea. The wedding celeberationjs are to start at 7:30 PM. The dress code is Indian Ceremonial.

Mangal Aashirwad will happen on March 11, Monday. The wedding reception will take place 7.30 PM onwards and the dress code is lounge suit or Indian formal. Check out the glimpse of the Invite for wedding.

Akash Ambani’s would-be father-in-law, is the managing director of Rosy Blue India, which deals in both rough and polished diamonds and has cutting-and-polishing factories in Mumbai and Indore. Shloka Mehta, the would-be Ambani bahu, is a director at the Rosy Blue Foundation, the philanthropic arm of diamond manufacturing company Rosy Blue Group. She is also a co-founder of ConnectFor, which matches volunteers with NGOs that need them.

A musical fountain show at the Dhirubhai Ambani Square, Jio World Centre, Bandra-Kurla Complex is scheduled for the day to celeberate the great wedding.

tags: Akashshlokawedding Ambani
previous The fraudulent billionaire, Nirav Modi tracked down in West End London with £8 million property!
next P Chidambaram: I supposed the thief returned the documents in between on Thursday
Related Posts