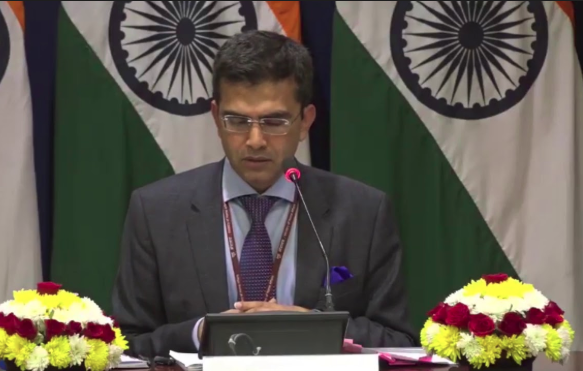 Ravish Kumar, the spokesperson for India’s Ministry of external affairs talked at a media briefing about how Pakistan is trying to cover up. He said if Pakistan claims about being ‘Naya Pakistan’ with ‘Nayi soch’ it should demonstrate ‘Naya Action’ against terrorist troops.

He also said, Pakistan should understand by the non military strike done by India on Jem camps in Pakistan that India is deterred to take decisive action against the cross border terrorism.

An Indian Air Force MiG-21 Bison, piloted by Wing Commander Abhinandan Varthaman, shot down a Pakistan Air Force F16 fighter aircraft and there were eyewitness accounts and electronic evidence for it, said Kumar.


“We have also shared evidence in the form of parts of AMRAAM Missile which were recovered from the site and are only carried by F-16 aircraft of the PAF,” he said.

“Only one aircraft was lost by India during Pakistan’s unsuccessful attempt at targeting Indian military installations, he said. Kumar also said if, as Pakistan claims, it has evidence of downing of second Indian aircraft then why has it not shared it.“


Pakistan must show credible, verifiable and sustained action against terror groups operating from its soil, he said.

tags: india pakistan
previous This Women’s Day, a salute to those Men who contributed to women empowerment
next The fraudulent billionaire, Nirav Modi tracked down in West End London with £8 million property!
Related Posts