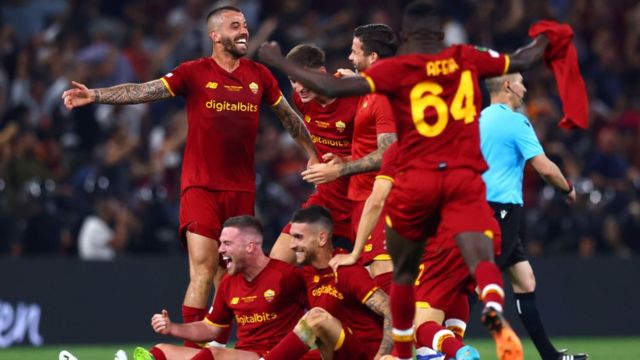 New Delhi: Roma football club defeated Feyenoord football club 1-0 in the finals of the UEFA Europa Conference League 2022 at the Arena Kombetare or Air Albania Stadium in Tirana, Albania on Thursday, May 26, 2022.

Team Feyenoord began the match with astrong attack as they pushed to the highest pitch. On the other hand, Roma’s Portugese midfielder Sergio Oliveira made an early appearance as he substituted Henrikh Mkhitaryan in the 16th minute.

However, both teams were unable to score in the first half. Feyenoord strengthened their attacks after half-time and kept pressing against equally strong defendants.

Roma made multiple saves, including a crucial save by keeper Rui Patricio in the 50th minute. Roma took the lead after Gianluca Mancini found midfielder Nicolo Zaniolo in the 32nd minute.

Zaniolo grabbed the ball between his legs and deftly flicked it beyond Feyenoord goalkeeper Justin Bijlow. Roma was leading 1-0.

The undeterred Feyenoord team kept pushing their players as Tyrell Malacia received a strategic pass for Reiss Nelson in the 62nd minute. However, the Englishman failed to catch the pass smoothly, whereas Roger Ibanez snuffed out the danger.

The team could neither equalize nor score more than their opponents, thereby making team Roma win by 1-0. The Italian team maintained the lead till the end with a strong defense and won their first-ever edition of the UEFA Europa Conference League.