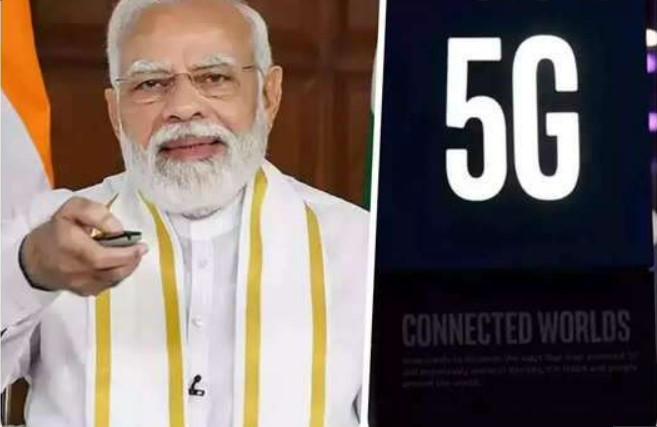 New Delhi: Prime Minister Narendra Modi on Saturday said the rollout of 5-G communication services in India will make sure the country played an active role in the development and implementation of technology, rather than remaining an end-user.

With this launch, India has become only the fifth nation—after Finland, Sweden, South Korea, and China—to roll out an end-to-end ecosystem for 5-G.

Launching 5-G at the Sixth India Mobile Congress (IMC), PM Modi said everyone is a stakeholder in the all-encompassing 5-G experience, which would reduce the technological and economic divide between rural and urban India.

He said this technology can expand the financial system, raise productivity and provide intensive development across all spheres of society. They should provide the MSME industry with opportunities to construct hardware components for the technological requirements of the telecom industry.

While Mittal said Airtel will roll out the 5-G services across India by March 2024, Ambani said Reliance Jio will do so by December 2023. Initially, they both are launching it in select cities. Birla, however, did not specify the dates for his company’s 5-G launch.

Modi said the 5-G rollout is the culmination of a series of policy steps undertaken by the government in aggressively expanding technology resources. The average mobile internet user is currently using 14 GB of data per month. “In 2014, the price of 14 GB of data was nearly Rs 4,200 per month. Now, the same data is available at Rs 125-150,” he said.

“The aim of Digital India is to bring technologies to the people which both work with them, and for them. It is a holistic vision of development for the country.”

Before 2014, India had 60 million broadband internet users, which have now grown to over 800 million. The number of total internet connections has also risen from just 20 million before 2014, to 850 million now, with more connections in rural India. Over 170,000 village panchayats are now also connected with optical fibers compared to just 100 panchayats before 2014.

Regarding manufacturing mobile phones, the PM said the government is focusing on four pillars, viz. the price of devices, digital connectivity, the price of data, and a digital-first thought process.

Telecom Minister Ashwini Vaishnav said the 5-G services would change many sectors like education, health, agriculture, logistics, and banking. “Telecom is a foundation and gateway of Digital India. It is a medium to deliver digital services to the masses. Therefore, the socio-economic development of the country needs a healthy and strong telecom sector.”

The government has simplified procedures as part of structural reforms. An average permit in the telecom sector used to take over 300 days, which has been reduced to less than seven days today, he said.

The Indian economy is expected to rake in USD 455 billion between 2023 and 2040 because of 5-G, according to the GSM Association (GSMA), the global industry association representing over 750 mobile network operators.

The PM inspected a series of 5-G uses showcased by the three major telecommunication service providers – Reliance Jio, Bharti Airtel, and Vodafone Idea—across the education and transportation sectors. He also connected to a student from Uttar Pradesh through hologram technology.

The 5-G rollout will be key to the expansion of robotics, artificial intelligence, and the internet of things, which are the drivers of the Fourth Industrial Revolution. Domestic and global technology giants showcased at the event several innovative technologies using 5-G to leverage.

They included smart metering of power connections to reduce distribution losses, ambulances equipped with 5-G to remotely provide tele-surgeries in the rural hinterland, and a smart manufacturing facility set up by Ericsson.

Modi also remotely drove a vehicle in Sweden through a tech update pioneered by Qualcomm, an innovation that can lead to transportation in hazardous areas without human intervention.