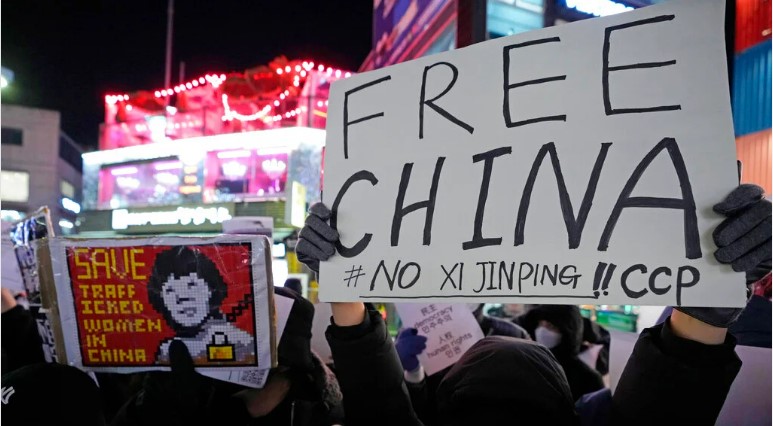 New Delhi: When Dr. Verghese Kurien launched “Operation Flood” in January 1970, he set in motion the world’s largest dairy development program later known as India’s White Revolution, which empowered millions of milk farmers. In contrast, the ongoing, youth-led “White Revolution” in China has rattled the Communist regime entrenched in the country since 1949.

Millions of angry demonstrators across China, protesting against the brutal Zero Covid policy of the government, discovered this unique way of mass protest, which gathered momentum within a couple of days. Holding aloft an-4 size blank white paper, they became harbingers of this silent revolution the government could do little about.

The frozen turbulence of the frustrated Chinese people was waiting for an outlet to melt and stream out. Beijing’s barbaric Zero Covid policy, which actually aimed at flushing out dissent against rising unemployment and plummeting economy post-pandemic, gave this opportunity to the people to stream out onto the streets. The extremes of the policy, which led to the death of 10 to 40 deaths because the fire extinguishers did not enter the locked down area in Urumqi, was what sparked their agitation against the regime as their agenda expanded.

In China, as elsewhere in the world, the white color depicts condolence to the dead. On November 23, when the protesters paid tributes to those who died in a fire in a high-rise building in the capital Urumqi in Xinjiang, they first carried candles, wreaths, and white papers. As their protest gathered steam and the number multiplied with university students joining, they carried only the white paper.

Who did they now pay their condolences to?

Some indications came in their impromptu slogans: “The Chinese Communist Party (CCP) is dead!”, “Down with Xi Jinping!”, “Disband the CCP,” and “Xi Jinping, resign”, among others, the media reported.

For the first time since the Tiananmen Square massacres of the pro-democracy uprising on June 4, 1989, China is now rattled to the core. It has reason to worry: it did not have social media or the Internet in 1989 and could quickly kill between 3,000 and 10,000 protesters and crush the rebellion.

Now, most Chinese people are hard-wired with each other, able to network instantly, and know how to circumvent the government’s technology firewalls, censorship, and social media controls to reach out to the rest of the world.

With the borderless connectivity, many Chinese, led by overseas Chinese students, have thus created an enormous anti-Communist movement ahead of the next Chinese New Year that falls on January 22, 2023. This is what the Communist regime dreads the most, as millions of Chinese people would migrate internally across the country to celebrate the event, taking the White Revolution to the areas unaffected so far, and inspiring the fence-sitters to decide.

Despite Beijing’s carrot-and-stick attempts to crush this uprising, videos of daily happenings have gone viral across the world. The mass demonstrations have forced the government to scale down or lift the Zero Covid restrictions in some areas. This has further emboldened the protesters to take their movement to the next level.

Already, the anti-Communist rebels are up in arms. Many of them have sent letters to senior officials of the People’s Liberation Army (PLA), reminding them they are accountable to the country and its defense, not to protect a political party (CCP) or a person (Xi Jinping, who got a rare, third five-year term as China’s President, Central Military Commissioner, and General-Secretary of the CCP, in October). The letter writers have emphasized that they are as patriotic as any Chinese citizen or soldier and only want freedom from Communist oppression, according to the media reports.

In another sign of what is brewing in China, many protesters gathered in Shanghai, the country’s largest city and a global financial hub, last week. They called to storm the government offices, throw out the Communist leaders, take control, and join the “Republic of China” (Taiwan), the self-governed and democratic island Beijing claims as its own!

Will the tail, then wag the dog?