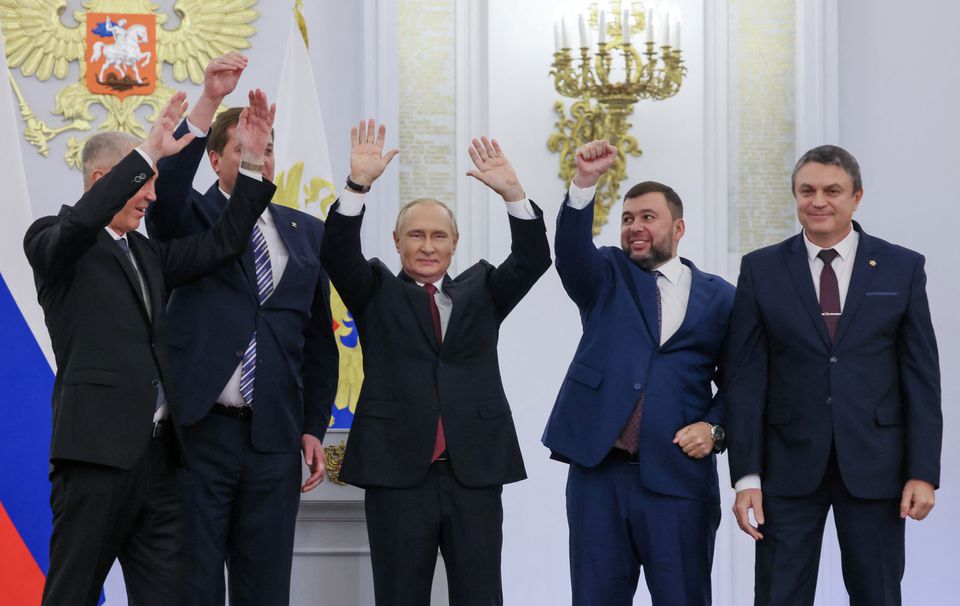 New Delhi:  Within hours of a defiant President Vladimir Putin annexing four occupied provinces of war-ravaged Ukraine, comprising 15 percent of its eastern territory, on Friday, the US announced fresh sanctions against Russia as the world inched closer to a likely widening of the war to Europe on Saturday.

The US Treasury and Commerce Departments will impose sanctions and export controls on any companies, institutions, or people who “provide political or economic support to Russia for its purported annexation,” the White House said late on Friday.

“Make no mistake: these actions (of Russian annexation) have no legitimacy,” President Joe Biden said. “I urge all members of the international community to reject Russia’s illegal attempts at annexation and to stand with the people of Ukraine for as long as it takes.”

“America is fully prepared, prepared with our NATO allies to defend every single inch of NATO territory. Every single inch,” Biden said. “And so, Mr. Putin, don’t misunderstand what I’m saying. Every inch.”

The annexation issue echoed in the United Nations where India, Brazil, and China abstained from voting on a draft resolution tabled in the 15-member Security Council by the US and Albania that condemns Russia’s illegal referenda and annexation of four Ukrainian territories—Donetsk, Luhansk, Kherson, and Zaporizhzhia—and asked Moscow to withdraw troops from Ukraine immediately.

India reiterated its appeal for an immediate cessation of violence in Ukraine and emphasized the need to find pathways for a return to the negotiating table.

The resolution failed to get adopted as Russia vetoed it. Of the 15-nation Council, 10 members voted for it and four abstained.

UN Secretary-General Antonio Guterres said any annexation of a state’s territory by another resulting from the threat or use of force is a violation of the Principles of the UN Charter and international law. Any decision to proceed with the annexation of Ukraine’s territory would have no legal value and deserved to be condemned, he said.

It cannot be reconciled with the international legal framework and stands against everything the global community is meant to stand for. It flouts the Purposes and Principles of the United Nations. It is a dangerous escalation. It has no place in the modern world. It must not be accepted, the UN chief said.

The West condemned the annexation as Ukraine President Volodymyr Zelensky said he was formally applying to the North Atlantic Treaty Organization (NATO) to fast-track and immediately enroll Ukraine as a member. He was ready for talks with Moscow, but not while Putin was president, he added.

Reacting to the Russian move, NATO Secretary-General Jens Stoltenberg said these actions make up the “most serious escalation” of the conflict since Moscow invaded Ukraine in February.

He said NATO reaffirmed its “unwavering support” for Ukraine’s independence, sovereignty, and territorial integrity, and would not be deterred by President Putin from supporting the country in defending itself against Russia.

On Saturday, the US imposed sanctions on over 1,000 Russian and Belarusian individuals and organizations.

Putin also tried to drive a wedge between the US and Europe as he accused Washington of “sabotaging” the Russian-built natural gas pipelines under the Baltic Sea to Germany, a claim America, and its allies rejected.

Without providing evidence, Putin blamed the US and its allies for blowing up pipelines under the Baltic Sea, raising the temperature in a crisis that has left Europe racing to secure its energy infrastructure and supplies, ahead of the onset of biting winter in the coming weeks.

President Biden said it “was a deliberate act of sabotage and now the Russians are pumping out disinformation and lies,” adding that Washington and its allies would send divers to find out what happened.

The ruptures on the Nord Stream natural gas pipeline system have led to what is likely the biggest single release of climate-damaging methane recorded, the United Nations Environment Programme said.

Meanwhile, the Biden administration is enacting a round of new sanctions aimed at further crippling Russia’s defense and technology sectors and other industries and cutting off more top officials and their families from global commerce, to punish Moscow for its efforts to annex parts of eastern Ukraine, the media reported.

While annexing the four Ukrainian occupied territories, Putin slammed the West and US for ‘double standards,’ and cited the plundering of India and Africa. He reminded the world of the West’s colonial policy, slave trade, and the use of nuclear and chemical weapons by the US, as he slammed them for their “utter deceit.”

“The West … began its colonial policy back in the Middle Ages, and then followed the slave trade, the genocide of Indian tribes in America, the plunder of India, of Africa, the wars of England and France against China …”

“What they did was hook entire nations on drugs, deliberately exterminate entire ethnic groups. For the sake of land and resources, they hunted people like animals. This is contrary to the very nature of man, truth, freedom, and justice.”

He made the remarks during a carefully choreographed formal speech in the Russian language at the Kremlin’s opulent St George’s Hall on Friday, days after the so-called referendums in the four occupied Ukrainian regions, which Ukraine and the US-led Western nations dismissed as “sham.”

In his 37-minute address, Putin said, “All we hear is, the West is insisting on a rules-based order. Where did that come from, anyway? Who has ever seen these rules? Who agreed or approved them? Listen, this is just a lot of nonsense, utter deceit, double standards, or even triple standards! They must think we’re stupid.”

Russia is a great thousand-year-old power, a whole civilization, and it will not live by such makeshift, false rules, he said.

With bluster and threats, Putin casts the West as the enemy, decrying the US for “satanism,” and escalating Moscow’s war against Ukraine. In starkly confrontational terms, he positioned Russia as fighting an existential battle with Western elites he deemed as “the enemy.”

Speaking to hundreds of Russian lawmakers and governors in a grand Kremlin hall, Putin said the residents of the four regions—which are still partially controlled by Ukrainian forces — would become Russia’s citizens “forever.” He then held a signing ceremony with the Russian-installed heads of those regions to start the official annexation process, before clasping hands with them and chanting, “Russia! Russia!”

Meanwhile, the World Bank said it will provide an additional USD 530 million in support to Ukraine, bringing the total aid by the bank to USD 13 billion.

The World Bank’s most recent analysis puts the total long-term cost of reconstruction and recovery in Ukraine over the next three years at well over USD 100 billion, said Arup Banerji, World Bank Regional Country Director for Eastern Europe.

Even as Russia annexed parts of Ukraine, many Russian men unwilling to join the war continued to flee across the borders of Georgia and other neighboring countries. Unmindful of this resentment, Putin signed a decree on Friday on routine autumn conscription, said a report in The Kyiv Independent, quoting TASS.

“Russian President Vladimir Putin signed a decree on September 30 authorizing routine autumn conscription for men aged 18 to 27, calling 120,000 people for military service, according to Russian state-controlled media TASS,” it said in a tweet.

At least 200,000 Russians have left the country in the week since President Putin announced a “partial mobilization” after a series of setbacks in his war with Ukraine, according to figures provided by Russia’s neighbors.

The mobilization could pull around 300,000 civilians into military service, from what Russian officials have said is a pool of some 25 million draft-eligible reservist adults, on their rolls, suggesting that the departures, though unusual, may not prevent the Kremlin from achieving its conscription goals.

Ignoring the challenges ahead, President Putin “celebrated” the annexation. He told invited spectators watching a televised patriotic pop concert on Moscow’s Red Square, in the shadow of the Kremlin walls, that Russia would achieve victory in its seven-month-old “special military campaign” in Ukraine.

Flanked by the leaders of their Russian-backed administrations, with the multicolored spires of the 16th-century St Basil’s Cathedral as the backdrop, Putin said people in the regions had made a choice to rejoin their “historic motherland”. He said Russia would do everything to support them, boost their security and rebuild their economies.