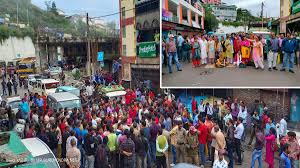 NEW DELHI, Sept 25: The preliminary autopsy report of the 19-year old Rishikesh murdered receptionist gave the cause of her death as drowning but it also mentions of ante-mortem injuries (injuries caused before death) on her body indicative of blunt force trauma.

The draft report released by the All India Institute of Medical Sciences, Rishikesh, indicate that Ankita Bhandari fell unconscious because of blunt hits on her body and was then dumped into the canal and left her to die due to drowning. The police said the final post-mortem report was expected later in the day and her family members who had initially refused to cremate the body till the final report was made available, later agreed to perform the last rites.

The family had also raised questions on the government action of prompt demolition of the resort where she was allegedly murdered and said it was an attempt to wipe out some evidences of the crime since the principal accused was the son of a BJP leader and former minister Vinod Arya who has since been expelled from the party.

Arya’s elder son too was expelled from the BJP but the father claimed on Sunday that he and his elder son “voluntarily” resigned from the party to ensure a free and fair investigation into the case while insisting that the accused son Pulkit Arya was a “simple boy” and was “innocent.” While claiming that his younger son did not stay with them, Vinod Arya, former chairman of a state board with the rank of a minister, said “Pulkit is innocent. He is a simple boy, can never commit such crime.”

Agitated local people blocked the Rishikesh-Badrinath national highway for several hours in Uttarakhand’s Shrinagar area, where the murdered girl lived, in protest and despite requests from the administration and the family, the protesters refused to move.

As the protesters sat on a dharna on the highway, the police tried to pacify them by bringing Ankita’s father Virendra Singh Bhandari to the spot to talk to them. The protesters, however, refused stating he was pressurised to talk by the administration.

They demanded the perpetrators of the crime be hanged immediately. A section of women at the dharna site also demanded that the accused be handed over to them so that they could be punished appropriately. Some of the protesters also said they would lift the blockade only after a written assurance from the administration of compensation and a job to Bhandari’s family.

Additional Superintendent of Police Shekhar Chandra Suyal appealed to them to end the protest, saying all necessary action was being taken against the accused. Virendra Singh Bhandari, who was brought in to try to pacify the protesters, told the crowd that the police were cooperating with him and investigations were being carried out properly. Shops in Shrinagar kept shutters down in protest against the murder.

Dr Jogdande also expressed surprise at the prompt demolition of the resort and said inquiry was being conducted who issued the demolition order. The opposition Congress had alleged that the demolition was carried out at the instruction of the chief minister Pushkar Singh Dhami to destroy the evidence of the murder allegedly carried out by the son of his party leader.

The teen was murdered allegedly by the hotel’s owner, a BJP leader’s son, and two others after she resisted their alleged attempts to push her into prostitution. Initially she was reported missing and her body was recovered from a canal on Saturday, four days after she “disappeared” from the resort. Pulkit Arya, the resort manager Saurabh Bhaskar and assistant manager Ankit Gupta have been arrested. The teen was last seen with the three men in a CCTV camera footage, the police said.

Two audio clips have now emerged in the Uttarakhand teen murder case that may help further implicate prime accused Pulkit Arya. These tapes reportedly bear conversations between the murdered woman’s close friend Pushp and Pulkit. From what he says in these tapes, it seems Pulkit was trying to cover up his role in the crime and mislead the investigation.

At one point during the conversations, the accused even asks the victim’s friend: “Is she with you?” In the first audio clip, Pushp can be heard asking Pulkit: “Last night, why did she [the victim] take your phone?” To that, Pulkit replied, saying: “Her phone had run out of battery and there was no need for me to keep my phone for the night. So I gave it to her when she asked for it.” Pushp then told Pulkit: “So, she did have a phone last night. Yet, it’s surprising that she never contacted me. In fact, I called her thrice, but her phone was switched off.”

Preliminary investigations have revealed that the victim’s phone had probably fallen into the canal where her body was dumped. The accused also claimed that the victim was with her until 9pm the previous night and the next morning she went missing.

In reality, the victim had told her friends that she would return to the resort by 8.30pm and contact them. However, when she did not contact her friends even beyond 8.30pm, her friends tried to contact her, but her phone was not reachable. It was then that Pushp started asking for the woman’s whereabouts by calling up her friends.

On the audio tape, as Pushp can be heard asking probing questions to Pulkit, the latter retorted at one point: “I have a feeling that she is probably with you. Is she with you?” He even tried to corner Pushp saying: “Maybe there’s something brewing between you and her, which her family members are not ready to endorse. Perhaps that’s why she was upset after speaking to you on the phone and that is why you are now trying to create a drama.” Pulkit also tried to dodge the question when Pushp asked him whether he had checked the CCTV footage at the resort where the victim worked.

It is being suspected that Pulkit had purposely dumped the victim’s body in the canal after the murder, with the sinister intention of implicating Pushp. His calculation was that if the body remained untraceable, her parents would most certainly file a police complaint, holding Pushp responsible for any wrongdoing since Pushp and the victim were close friends.

Perhaps that is why, during the phone conversation with Pushp, Pulkit said that since the female receptionist was seen having such long conversations with him, perhaps she was with him. To that, Pushp replied: “That’s just not possible because I’m at a place right now that is about 13-14 hours away from her location.”

Even while Pulkit was at the police station, a day after the crime, he was reportedly trying to mislead the police and the victim’s friends. In the second audio clip, he can be heard saying that he was still trying to locate the missing resort receptionist. In an attempt to threaten the victim’s friends and influence the murder investigation, Pulkit can be heard saying: “Police will soon be checking the call details of all her friends to get to the bottom of the case and that could spell trouble for you all.”

The SIT team, constituted at the instance of the chief minister to investigate the murder, will now probe the WhatsApp chats of the teen. She had disclosed to one of her close friends that she was forced to provide ‘special service’ to clients at the resort. “We have called every employee in the resort to the police station; will take everyone’s statements. We’re running a full background analysis on the resort. Ankita’s WhatsApp chats that have surfaced are also being probed, “DIG PR Devi, SIT in-charge said.

The murdered Uttarakhand receptionist’s father has called for the accused men to be hanged. He also demanded that the full autopsy report be made available to him immediately and the case be fast tracked. On Saturday, a call recording of the state’s top cop Ashok Kumar was posted by the state police, where he was heard assuring the victim’s father that he would try to get all the accused hanged to death.