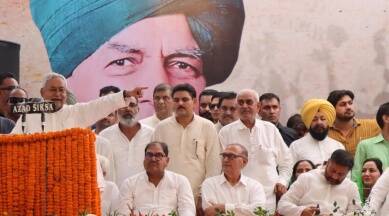 The opposition leaders used the 109th birth anniversary celebration on Sunday of the former deputy prime minister Chaudhary Devi Lal at Fatehabad in Haryana as the platform to come together and appeal to other parties not represented on the occasion to join hands to jointly defeat the “misrule” of the BJP.

Prominent among the speakers was the Bihar Chief Minister Nitish Kumar who gave a clarion call for the Opposition to unite ahead of the next general elections saying that it was not just about the “third front”, but there was a need to cobble together a “main front” to defeat the present regime.

Saying that he had no personal ambitions, Kumar said all Opposition parties must come together and not go “here and there”. The Bihar Chief Minister said he had requested Indian National Lok Dal (INLD) chief Om Prakash Chautala, Devi Lal’s son, to bring together more and more political parties. “We even made a request to the Congress,” added Kumar.

“If all non-BJP parties unite, then they can get rid of those who are working to destroy the country,” Kumar said, adding “My only wish is that we all need to come together at the national level… We need to bring together more parties.” he said.

Bihar Deputy Chief Minister Tejashwi Yadav said Kumar’s “fearless” decision to part ways with the BJP would prove to be the last nail in the party’s coffin. He said that Kumar had no vested interests, but his only ambition was to uproot the communal forces.

Pointing out that the National Democratic Alliance (NDA) had ceased to exists, Yadav said the JD(U), SAD, and the Shiv Sena left the BJP-led NDA to save the Constitution and democracy. He also accused the BJP of making false claims and promises pointing out that at his recent public meeting the union Home Minister Amit Shah spoke of an airport in Purnea in Bihar as an achievement of the Narendra Modi government though there is no airport in the city. While the Bihar Government has begun the exercise to give jobs to people, the BJP Government at the Centre has been unable to fulfil its promise of giving jobs, he alleged.

Shiromani Akali Dal (SAD) president Sukhbir Singh Badal joined the call for like-minded parties to form a united front. Speaking at rally, Badal said his party along with the Shiv Sena and the JD(U) are the ‘‘real NDA’‘ as they had founded the alliance. He said it is the time for “all like-minded parties to unite under the flag of farmers and labourers and work for their welfare”.

Talking about the NDA, Badal said the alliance was formed when BJP was relatively a weaker force. “The real NDA is sitting here, it was founded by Shiv Sena, Akali Dal and JD(U). We stood by BJP when it was a relatively smaller party. But now it is time to forge an alliance for farmers and labourers,” Badal said. Badal also attacked the Aam Aadmi Party (AAP) and said such parties destroy the entire state machinery when they come to power.

The Congress was not represented at the event and the AAP was not invited for its anti-Haryana stand on the Sutlej Yamuna Link dispute, said INLD leaders. Telangana Rashtra Samithi (TRS) and Trinamool Congress (TMC), though invited, chose to stay away from the event.