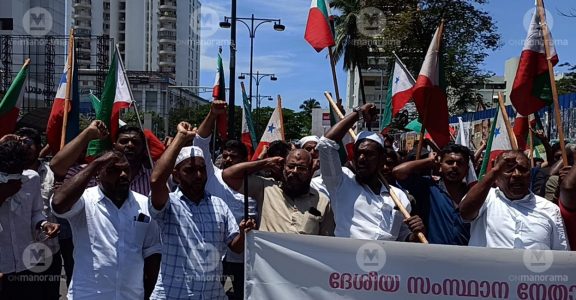 NEW DELHI, Sept 28: Within hours of the central government banned the Popular Front of India (PFI) and its eight frontal organisations for five years for its alleged terror activities and links with terror organisations, the PFI announced disbanding the organisation “as a law-abiding citizen.”

In a statement, the PFI Kerala state general secretary and senior national leader A Abdul Sattar said the organisation was disbanded after the Ministry of Home Affairs (MHA) issued a notification banning it. “As law-abiding citizens of the country, we accept the decision of the Home Ministry,” he added.

But soon after he posted on the message on the outfit’s Facebook page disbanding the organisation, Sattar was arrested from Alappuzha in Kerala. Sattar was allegedly absconding after calling a nation-wide strike on September 23 against the National Investigation Agency (NIA) raids on the outfit’s offices and arrests of its leaders in different parts of the country. Sattar is likely to be handed over to the NIA soon.

In his website message, Sattar said, “The PFI has been working with a clear vision for the socio-economic and cultural empowerment of the underprivileged, downtrodden and marginalised sections of the society for the past three decades. But as law-abiding citizens of our great country, the organisation accepts the decision of the Ministry of Home Affairs. It also informs all its former members and the general public that the Popular Front of India has been disbanded. All members of the Popular Front of India are requested to cease their activities since the publication of the notification,’’ he said.

The ban came a day after the second nationwide crackdown on the radical outfit in five days with police teams across seven states conducting raids on Tuesday and detaining or arresting more than 270 people with alleged links to the radical outfit.

During the September 23 strike, its activists had allegedly engaged in widespread violence resulting in damage to buses, public property and even attacks on the general public. Multi-agency teams, spearheaded by NIA, had last week carried out raids at 93 locations in 15 states across the country and arrested over 100 PFI leaders for allegedly supporting terror activities in the country.

Kerala had accounted for the maximum number of 22 arrests. The arrests were made by the NIA, the Enforcement Directorate (ED) and police forces of the states concerned.

Official sources said the decision to ban the PFI was taken by the prime minister Narendra Modi and the union home minister Amit Shah only after the national security planners had prominent Muslim organization on board against proposed action on Sunni Wahhabi outfit.

It is understood that National Security Advisor Ajit Doval met the prominent Muslim organization leaders on September 17 to understand their views before NIA, ED and State Police raids were conducted on September 22 and 23.

Though the AIMIM chief Asaduddin Owaisi criticised the ban order, most other Muslim organisations have supported banning a set up suspected to have terror links. The NSA and Intelligence Bureau officers took the opinion of country’s biggest Muslim organisations including those representing Deobandi, Barelvi and Sufi sects of Islam. All these organizations were equivocal in their opinion that PFI was following a Wahhabi-Salafi agenda of pan-Islamist organisations with their extremist campaign to exploit the communal fault-lines in India.

The Centre’s decision to ban the PFI and its associates has been welcomed by the Sufi and Barelvi clerics. The All India Sufi Sajjadanashin Council chairman said everyone should show patience if an action has been taken to curb extremism.

“The All India Sufi Sajjadanashin Council believes that if this action has been taken for compliance with the law and the prevention of terrorism, then everyone should work patiently on it, this step of the government and investigative agencies should be welcomed,” the statement read.

Zainul Abedin Ali Khan, the spiritual head of the Ajmer Dargah welcomed the move and said the action taken as per law to prevent terrorism should be welcomed by all.

The centre had earlier declared the PFI and its affiliate organisations an “unlawful association” under the Unlawful Activities (Prevention) Act (UAPA) citing the outfit’s links with the Students Islamic Movement of India (SIMI), Jamat-ul-Mujahideen Bangladesh (JMB) and Islamic State or ISIS, and said the PFI is involved in several criminal and terror cases.

The outfit has been accused of raising funds, from both India and abroad, through hawala and donations as part of a “well-crafted criminal conspiracy”. “With funds and ideological support from outside, it has become a major threat to the internal security of the country,” said a Home Ministry order. The ministry said the PFI has been involved in violent acts like, “chopping off the hand of a college professor in Kerala and cold-blooded killings of people associated with organisations espousing other faiths.”

“Several criminal activities and brutal murders have been committed by PFI members over the past to create reign of terror in public mind,” it said. The Home Ministry said PFI and its affiliates have been indulging in unlawful activities “prejudicial to the integrity, sovereignty and security of the country”, and that they have the potential to disturb public peace and communal harmony.

Calling the ban “undemocratic” and “unconstitutional”, the Campus Front of India — students’ wing of the PFI – had before disbanding of the PFI had stated that they would challenge it in Supreme Court. They have not made their stand clear after the PFI was officially dissolved.

previous Navaratri 2022: 6 Street Foods to try in Gujarat during Navaratri
next Congress Still in the Dark on Presidential Election
Related Posts