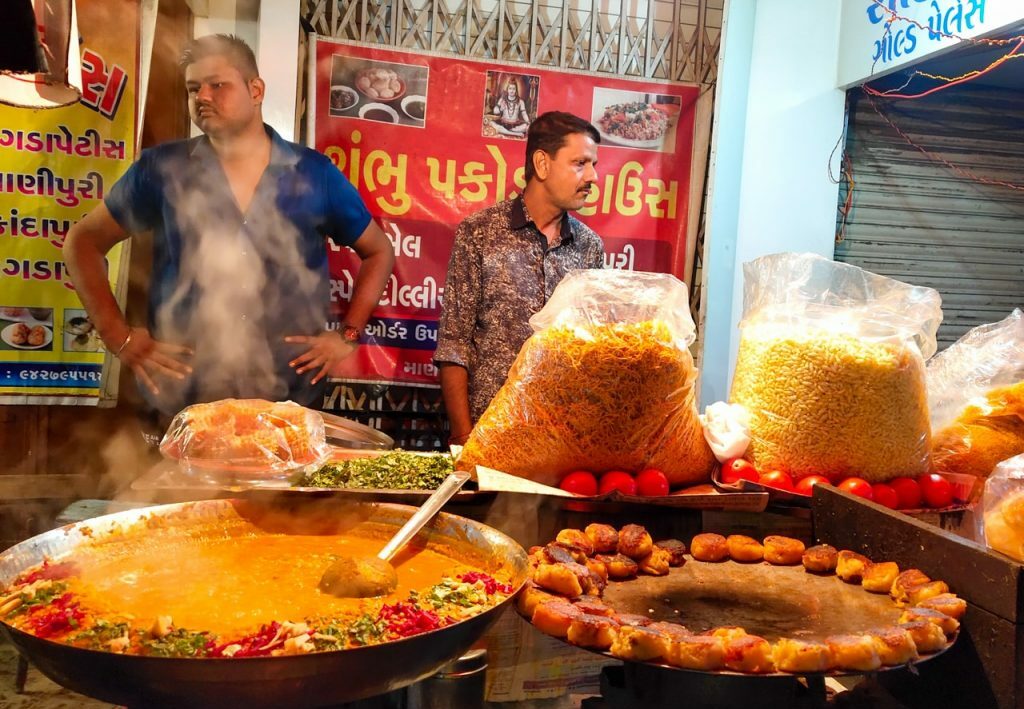 Ahmedabad: Navaratri is an elaborate Hindu festival which is observed for nine consecutive days. This year the festival commenced on Monday, September 26, 2022, and is expected to end with Vijaydashami or Dusshera on Wednesday, October 05, 2022.

Food is an essential element in every Indian festival. Every festival is incomplete without food and special preparations. People hailing from the eastern parts of the country prefer to offer, prepare, and consume non-vegetarian dishes, whereas those hailing from the western India prefer a strict vegetarian diet during Navaratri.

The western state of Gujarat is known for food connoisseurs and people who relish eating as much as they enjoy celebrating nuances of every festival. However, this love for food is amplified during the Sharad navaratri every year.

People attend Dandiya and Garba events and dance to the holy tunes during the course of the festival. Therefore, several roadside stalls as well as cafes and restaurants remain open till late hours to early morning in order to satiate the hungry dancers.

People who dance till late prefer to enjoy a midnight snack or grab a late night meal between the dance performances. Several people resort to local food stalls and street stalls during the festival.

The following is a list of 6 street foods and snacks that are popularly available across Gujarat during Navaratri, while keeping in mind people who have been fasting:

1.Sev Khamani: A popular local snack, Sev Khamani is prepared by soaking Chana Dal in water for 4-5 hours. Different types of Sev or savouries are used to garnish the Khamani. Spicy and salty sev are are used to make the Khamani, depending upon customer preferences. Since it was invented in Surat, there is a special variety known as Surati Sev Khamani. The dish can be relished during any time of the day.

2. Khandvi: It is another snack prepared from gram flour and buttermilk. This thin steamed gram flour roll is the perfect street food to pair with a cup of tea. Khandvi is one of Gujarat’s most popular dishes. These rolls melt in the mouth. What makes them popular is the fact that they are simple to prepare with readily available ingredients.

3. Fafda: Another popular and favourite Gujarati snack, Fafda is a fried crispy snack made with gram flour, laced with carom seeds and black pepper. It is a well-known Gujarati vegetarian snack. This is typically served with mint-coriander chutney.

4. Biranj: It is a sweet rice dish made with ghee, jaggery, and dry fruits. It is prepared for special occasions and festivals and served as a dessert. Though not typically counted as street food, it is popular among Gujaratis during Navratri. This flavourful sweet dish is the best way to cleanse the palate after a heavy Navratri meal.

5. Faraali Patties: is a popular Gujarati snack that is relished especially during Navaratri. The preparation of the Patties is similar to the Aloo Tikki that is widely available across North India but the taste is vastly different. Both the patties and the tikki have a different filling in the centre and a potato shell on the outside.

It is majorly consumed by people who have been fasting during Navaratri due to the ingredients involved that are favourably used for people who observe fasting.

6. Pav Bhaji: One of the most well-known Indian street foods, Pav Bhaaji is widely available across Gujarat as a late night food item during Navaratri. Pav Bhaji is essentially a potato curry, mixed with other vegetables, served with buttered buns, also known as pav. It is considered to be one of the most fulfilling meals post-garba and is the easiest way to gratify hunger after a long and tiring dandiya session.

Therefore, Navaratri is essentially known as a festival of food as much as it is known for garba and dandiya across Gujarat. However, there are certain dos and don’ts to be kept in mind while preparing and consuming Navaratri-special delicacies for people observing fasts.

People who have kept a fast are expected to avoid consuming onion and garlic. Therefore, all the street food vendors prepare dishes without onion and garlic during Navaratri to ensure all consumers enjoy and relish the food and the festival without hesitations.