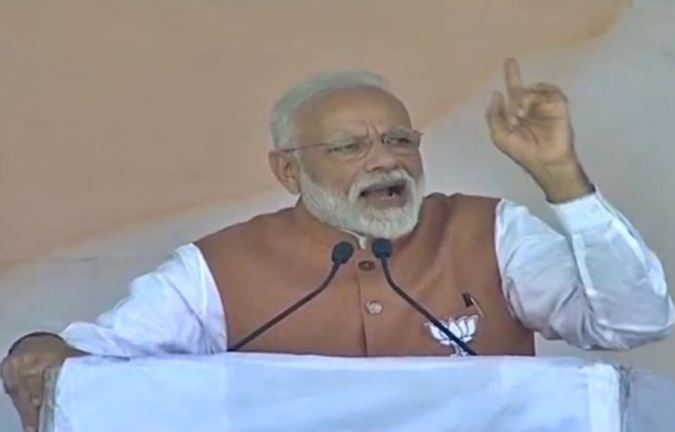 Prime Minister Narendra Modi today kick started the campaign for the Lok Sabha elections 2019 from Meerut in Uttar Pradesh, targetting the Congress and positioning his government as a strong and decisive one.

Juxtaposing the rule of the Congress under UPA against the five years of the National Democratic Alliance (NDA), Modi said that his government has shown the resolve to strike at terror through surgical strikes and fulfilling the long standing demands of the armed forces. On the other hand, the Congress government tried to shield terror backers and joined hands with the corrupt.

PM attacked Congress as UPA’s “Mahamilavat  Sarkar” for questioning Jan Dhan Yojana, A – SAT. He mocked Rahul Gandhi’s tweet of wishing PM Happy Theater Day. He said, “ Intelligent Opposition does not understand the difference between a film’s set and A- SAT. Hence they are wishing Theater Day’s greetings.

Asserting that the Congress and other Opposition parties are incapable of keeping the nation secure, Modi said that the government’s actions had brought the Opposition to tears. “Does the country need heroes of India or heroes of Pakistan?” PM Modi asked.

Modi calls BSP –SP –RLD pact in UP as Sharab, said this Sharab will destroy you!

Modi said that UP saw ‘do ladke’ (Akhilesh and Rahul alliance) during the Assembly polls. Now bua-bhatija are together. Their slogan was ‘UP ko looto, baari-baari’.

The goondaraj, Modi said, was rampant in Uttar Pradesh. He also said that they are opposing triple talaq. They argue that triple talaq prevents a woman from getting killed. He criticized their way of thinking and asked people to understand their cheap though process. Prime Minister Modi also charged the opposition that they prevented Muslim women from exercising their franchies. He also appealed to the people come out in large numbers on April 11 to participate in the election.

Modi told the crowd that when you will press the ‘lotus’ button, your will diretly vote for me. He also sought the people blessings to fight against blackmoney, terrorism. Modi said that he need public support to make Uttar Pradesh “Uttam Pradesh”.