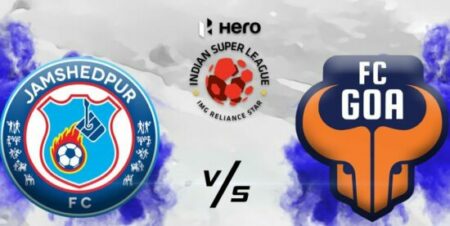 The match began with Jamshedpur possessing the ball and taking a natural lead. Goa’s Edu Bedia suffered a knee injury in the 10th minute. Jamshedpur’s Daniel Chukwu got the ball from the edge of the penalty box and ran towards the goalpost as his ball went wide in the 18th minute.

Bedia twisted his ankle and suffered another injury in the 20th minute. Goa’s Ivan Gonzalez hit the crossbar with a header and gave the ball to Bedia. Jamshedpur keeper TP Rehenesh saved Bedia’s left-footed shot in the 28th minute. Both teams stood goalless at the end of the first half.

Jamshedpur’s Laldinliana Renthlei gave a right flank pass to Chukwu, who drifted in the penalty box and struck the ball. Though Goa keeper Naveen Kumar tried to save the shot, the ball brushed past his fingertips and went inside the net in the 49th minute. Jamshedpur FC was leading the second half with a point.

Bedia gave a fizzling cross to Anwar Ali as he tried heading over to the crossbar. However, Jamshedpur’s Peter Hartley snatched the ball and stopped the attempt in the 63rd minute. Though Goa’s Airam Cabrera tried scoring in the 81st minute, the shot went over the crossbar. Despite several substitutions, the match ended with Jamshedpur gaining a point against the goalless Goa.