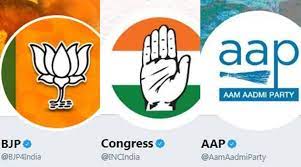 NEW DELHI, Dec 5: The exit polls for the two state Assemblies and the Delhi Municipal Corporation elections released on Monday does not bring very happy news for the ruling BJP.

Being in power in all the three, the BJP would be worry of making any poor show with the Parliamentary elections due in another 15 months or so. But the exit polls on an average show that while the saffron party was expected to give a better show than 2017 in the prime minister Narendra Modi’s home state of Gujarat, it may barely manage to cling to power in Himachal Pradesh and is likely to be ousted from the Delhi Municipal Corporation after 15 years in power.

The average of the various exit polls carried out by different media organisations show that while in Gujarat the BJP was expected to sweep the polls capturing about 130 seats in the 182-member state Assembly, leaving only about 40 to 45 seats to the Congress. The Aam Aadmi Party (AAP) despite its high voltage campaign, may register its entry in the Gujarat Assembly but is likely to end up at seven to 10 seats, a far cry from winning a majority and forming a government in a state being ruled by the saffron party for the last 27 years.

In the 2017 elections, most the exit polls had predicted more than 110 seats for the BJP had but the party had ended up winning only 99 seats and the Congress 77 in the direct contest between the two parties. It was Congress party’s best ever performance since 1985 when it had won a record 149 seats under the leadership of the then chief minister Madhavsinh Solanki who later became the external affairs minister in the Narasimha Rao government at the centre.

In the 68-member Himachal Pradesh Assembly, the BJP may get just about 37 seats, barely two seats more than the majority mark of 35, and the Congress may end up with 30 seats and stay on on the opposition benches with one seat going to the AAP, the party which began the electioneering in a big way in advance but ended up in a whimper as the poll days approached.

But the exit poll predicts a disaster for the saffron party in Delhi Municipal Corporation where it may have to hand over the power to the AAP after 15 years in the office. As per the exit polls, the Delhi chief minister Arvind Kejriwal’s AAP is expected to win 155 to 160 seats in the 250-member MCD with the BJP reduced to 80 to 84 seats and the Congress seven to 10 seats. This would mean that all the administrative machinery in the national capital, the seat of the central government, would go into the hands of the AAP.