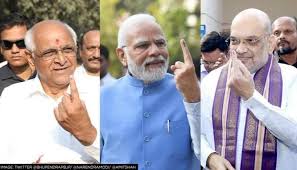 NEW DELHI, Dec 5: Despite the appeal by the election commission to the people to shake off “urban apathy” and cast their votes in large numbers, an estimated 59 per cent of the 2.51 crore voters turned out to exercise their franchise in the 93 constituencies in 14 districts in north and central Gujarat in the second and concluding phase of the elections to the 182-member Gujarat Assembly on Monday.

With reports from various constituencies in the interior still being awaited, the final figure of the turnout may marginally improve to 60 to 62 per cent but would still be less than the expectations of the election authorities. In the first phase of polling in the 89 constituencies in Saurashtra, Kutch and south Gujarat was held on December 1 with an average turnout of 63.31%, lower than the last time’s 67.79%, which prompted the election commission to issue the appeal pointing out that “urban apathy” had caused the overall decline in the polling percentage though the rural voters had turned up in large numbers to cast their votes.

The fate of the 833 candidates in the fray in the second phase of polling were sealed in the ballot boxes till the counting is taken up on December 8. The prime minister Narendra Modi, the Uttar Pradesh governor and former chief minister Anandiben Patel, and the union home minister Amit Shah were among the prominent voters to cast their votes. All the three, Modi, Patel and Shah are voters in different constituencies in Ahmedabad as is the Gujarat chief minister Bhupendra Patel.

Prime Minister Modi’s mother Hiraba cast her vote at a polling booth in Raysan village near Gandhinagar city. The PM’s mother, who entered her 100th year in June, lives with her younger son Pankaj Modi in Raysan village near Gandhinagar city. She reached the polling booth in a wheelchair with the help of Pankaj Modi and other family members and exercised her franchise. Modi’s elder brother Somabhai Modi also cast his vote in Ahmedabad. Somabhai cast his vote at Nishan Public school, Ranip in Ahmedabad, the same polling booth where PM Modi had voted in the morning.

Bed-ridden people, patients on oxygen support, senior citizens including centenarians, and transgender persons were among those who came out to vote. Physically challenged Ankit Soni, who was born without arms, took everyone by surprise as he used his toes to sign a form at the polling booth and push the button on the Electronic Voting Machine (EVM) in Nadiad town of Kheda district. In a tweet, Gujarat’s Chief Electoral Officer P Bharathi praised 110-year-old Shantaben Thakor, who exercised her franchise in Vijapur town of Mehsana district.

The Election Commission set up 26,409 booths and nearly 36,000 Electronic Voting Machines (EVMs) were engaged. Around 29,000 presiding officers and over 84,000 polling officers had been deployed in 14 districts to facilitate the polling process.

The Congress, meanwhile, raised an objection about the prime minister taking out a two and half hour long “roadshow” on the polling day while coming from Gandhinagar to coast his vote in Ranip in Ahmedabad. “On polling day, PM Modi did a roadshow of two and a half hours while he went to cast his vote. We will appeal to the EC against it. It seems like the Election Commission is willingly under pressure,” said Congress Spokesperson Pawan Khera.

Earlier on Sunday night the Congress sitting MLA from Danta scheduled tribe reserve seat in Banaskantha district Kanti Kharadi was attacked and his car badly damaged reportedly by the rival BJP workers. The party accused BJP of attacking Mr. Kharadi ahead of voting in the seat. Two party leaders including Rahul Gandhi have tweeted condemning the alleged attack on Mr. Kharadi while questioning the ECI’s silence.

previous Exit Polls: BJP May Sweep Gujarat, Gain Bare Majority in Himachal but Ousted from MCD
next BJP Starts Preparations for Next Round of Elections
Related Posts