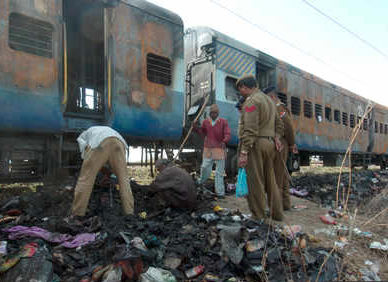 Union minister Arun Jaitley on Friday said that the Congress termed the Samjhauta Express blast as a terror act to defame the Hindu society. Jaitley said that the court judgement clearly stated that it was a clear case of no evidence.

“Judgement cleary stated that it is clear case of no evidence but the government, at the time, tried to defame the Hindu society,” Arun Jaitley said.

Arun Jaitley said, “Congress coined ‘Hindu terror’ and filed cases based on fake evidence to create this theory but in the end court has to take the decision.”

Sixty-eight people including 43 Pakistan citizens, 10 Indian citizens and 15 unidentified people were killed in the blasts which took place on the Attari-bound Samjhauta Express on February 18-19 night in 2007. Two explosions took place in two unreserved coaches between Diwana and Panipat in Haryana. Two bombs that did not go off were recovered later.

In a 160-page order which was released Thursday — the verdict was delivered on March 20 — special NIA court judge Jagdeep Singh said the “best evidence” was “withheld” by the prosecution and was not brought on record. He said some of the cited independent witnesses were never examined or sought to be declared hostile for cross-examination when they chose not to support the prosecution case.

Arun Jaitley also slammed the opposition party and said, “Perhaps because of this, those who considered Hindus as terrorists are now trying to prove their devotion towards religion.”

The case was initially investigated by Haryana Police but in July 2010, the probe was handed over to NIA.

All accused in the case were acquitted for want of evidence. The court said, “There is no concrete oral, documentary or scientific evidence to connect the accused with the crime. There is not an iota of evidence to make out any motive.”