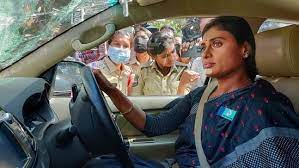 NEW DELHI, Nov 29:  Amidst high drama, Y S Sharmila, who is trying to set herself as the principal rival against the Telangana Chief Minister K Chandrashekar Rao, was briefly arrested in Hyderabad on Tuesday after the police toed the car away with she siting inside and her party workers raising voice of protest.

Sharmila, the sister of the Andhra Pradesh chief minister YS Jagan Mohan Reddy, who has decided to make the neighbouring Telangana her political fiefdom, was arrested when she tried to lead a march towards the residence of the chief minister Rao to protest against the alleged attack on her by the workers of the ruling Telangana Rashtra Samithi (TRS) on Monday.

A note from her party said Ms Sharmila set out for the Chief Minister’s residence “as a mark of protest and condemnation against the bloody attacks by the TRS goons against her and the party activists during the Padayatra yesterday in Warangal district.”

Ms. Sharmila, along with a large number of supporters, had planned to assemble at the Pragati Bhavan. While several of them were detained by the force outside the Bhavan, Ms. Sharrmila, who drove in the same SUV that was vandalised by TRS activists in Warangal, remained seated at the wheel and locked herself from the inside.

Police made several attempts to get her out of the vehicle, but she remained firm. Officials then pressed a tow truck, tied and pulled the SUV all the way till SR Nagar police station, about four kilometres away on the route. Tension prevailed at the police station too as several activists gathered to protest the police action.

Ms Sharmila was briefly detained on Monday following a clash between her supporters and workers of the ruling Telangana Rashtra Samithi in Warangal. This morning, she got into the driver’s seat of one of the cars damaged in yesterday’s clash and tried to go to Pragati Bhavan, Chief Minister K Chandrashekar Rao’s official residence.

Visuals showed her getting inside the car which had damaged windowpanes. She was stopped by the police. After she refused to come out, police brought a crane and towed away the vehicle as she sat inside. Some party supporters were also whisked away by police.

Ms. Sharmila, during her padayatra had come down heavily on the local MLA P. Sudarshan Reddy of the TRS and had questioned his source of income. Ms. Sharmila’s caravan was set on fire and her SUV was vandalised by TRS activists as a reaction to her remarks.