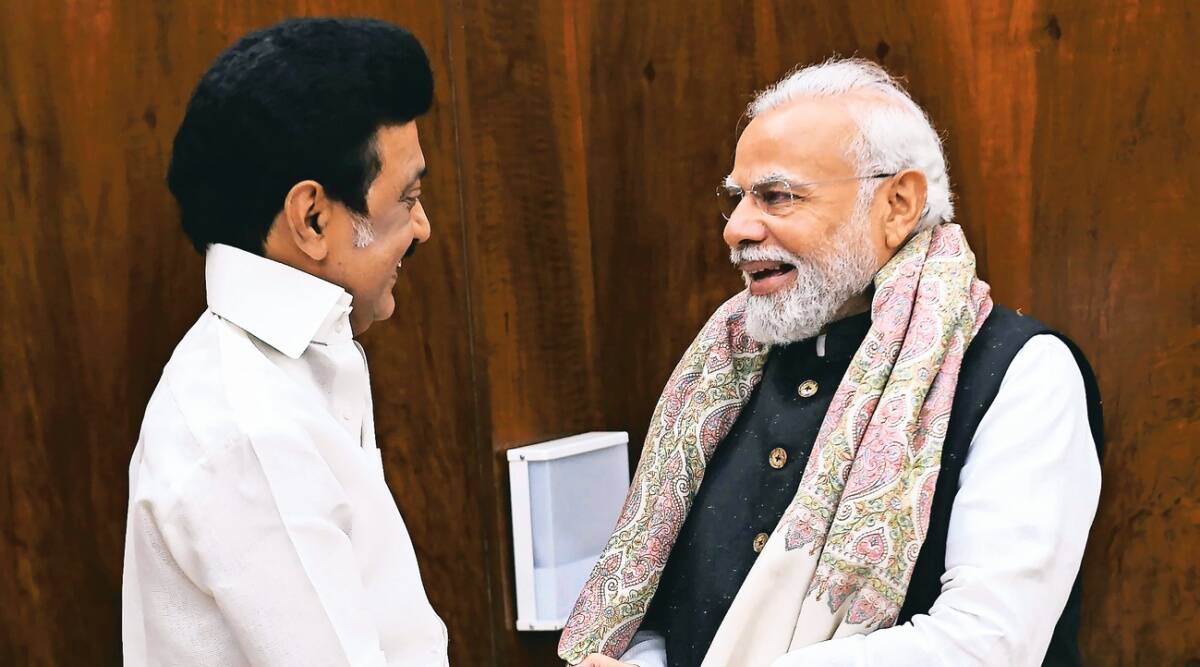 NEW DELHI, May 26: As the prime minister Narendra Modi on Thursday praised Tamil Nadu as a special place and lauded the Tamil language as eternal and its culture as global, the chief minister M K Stalin urged the prime minister to make Tamil an official language on par with Hindi.

Stalin also called for exempting Tamil Nadu from the national medical entrance test NEET after a bill was passed recently in the state assembly. The DMK, which came to power in Tamil Nadu last year, has long demanded “official and administrative” language status for Tamil. Tamil was given the “classical language” status when the Congress-led UPA was in power.

Laying the foundation stones of 11 projects worth over Rs 31,500 crore, Modi had praised Tamil culture and language. He said the Bengaluru-Chennai expressway will connect 2 key centres of growth. He also said the government is committed in developing the social and physical infrastructure of the nation. Greeting the prime minister, Stalin said Tamil Nadu was a state for inclusive growth, equality and women’s empowerment and called it a “Dravidian model.”

Modi said the centre was committed to popularising the Tamil language and culture. “The Tamil studies department at Banaras Hindu University, in my constituency, is more special to me. NEP gives special importance to promoting Indian languages.” he said.

Talking about the infrastructure development, Modi said, “History has taught us that those nations which gave top most importance to infrastructure changed from developing to developed nation. India is focusing on it. When I say infrastructure, I mean the upgarding social infrastructure. Our government is working to achieve saturation level to cover key schemes. We are working on ensuring drinking water to everyone. The focus on physical infrastructure will benefit youths the most. It is our vision to take high speed internet to every houses,” he said.

From the stadium, Modi inaugurated 11 projects, including the 262-kilometre Chennai – Bengaluru Expressway, worth ₹ 31,000 crore. Underscoring the National Education Policy, he said technical and medical courses can be pursued in local languages and youngsters from Tamil Nadu could benefit from this.

The prime minister said India was providing all possible support to the economic crisis-hit Sri Lanka including financial, fuel, food, medicine and other essential items and recalled that he was the first Indian Prime Minister to visit Jaffna earlier.

Modi held a roadshow after arriving in Chennai when the BJP workers accorded a rousing reception with a large number of cadre lining up on roads with party flags and raising slogans hailing him and hosting traditional cultural events. Cultural dances like ‘Karagattam’ and ‘Poikkal Kuthirai Aatam’ were held to the accompaniment of traditional music and several artists dressed up in ‘Kathakali’ attire could be seen lining up on road margins to welcome the Prime Minister.

Modi inaugurated 1,152 houses constructed under the Light House Project – Chennai. The project has been built at a cost of ₹ 116 crore under Pradhan Mantri Awas Yojana-Urban. The Prime Minister also laid the foundation stone of a Multi Modal Logistic Park in Chennai worth around ₹ 1,430 crore. It would provide seamless intermodal freight movement and also offer multiple functionalities.

The Prime Minister also laid the foundation stones for the redevelopment of five Railway stations in Tamil Nadu – Chennai Egmore, Rameswaram, Madurai, Katpadi, and Kanyakumari. Redevelopment of the Railway stations project will be completed at a cost of over Rs 1,800 crore. The project has been undertaken with a view to enhancing the convenience and comfort of the passengers through modern amenities.