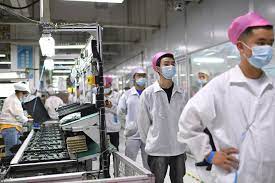 NEW DELHI, Dec 5: In a shocking revelation that supported the impression that lasted for the last two years, a US-based scientist has revealed that Covid-19 was a “man-made-virus” and both the United States government and the Chinese lab are to be blamed for its spread across the word.

US-based researcher Andrew Huff, who worked at the controversial research lab in China’s Wuhan, Wuhan Institute of Virology (WIV), a Chinese government-run and funded research facility, in a statement to the British newspaper The Sun, said Covid-19 virus was “leaked” from the WIV two years ago because of its inadequate safety measures.

Huff, a former vice president of EcoHealth Alliance, in his new book – The Truth About Wuhan, has blamed the US for ‘biggest intelligence failure since 9/11’, as quoted by British journal The Sun. He claims the pandemic was caused by the US government’s funding of coronaviruses in China. Excerpts of Huff’s book have been out in “The Sun” which has access to the yet to be published book. Mr Huff, an epidemiologist, is a former vice president of the EcoHealth Alliance, a non-profit organisation based in New York that studies infectious diseases.

“EcoHealth Alliance and foreign laboratories did not have the adequate control measures in place for ensuring proper biosafety, biosecurity, and risk management, ultimately resulting in the lab leak at the Wuhan Institute of Virology,” Huff has claimed in his book.

Huff states the pandemic was caused by the US government’s funding of coronaviruses in China. Despite China and the Wuhan officials denying allegations of the virus leak several experts in the past have observed the Wuhan to be the origin of Covid. China even stalled the WHO probe into its origin by denying access to the facility.

For more than a decade, the organisation has been studying several coronaviruses in bats with funding from the National Institutes of Health (NIH), a US government agency, and has forged close ties to the Wuhan lab. The NIH is the primary agency of the United States government responsible for biomedical and public health research.

According to the report, Dr Huff feels Covid was born through gain of function research funded by the US government – and poor biosafety led to a lab leak.

“EcoHealth Alliance developed SARS-CoV-2 and was responsible for the development of the agent SARS-CoV-2 during my employment at the organisation,” he was quoted. However, he cleared that he has seen no evidence China deliberately released the virus. Dr Huff also believes the US-funded project was “mostly a global fishing expedition for coronaviruses” to carry out gain of function work or for intelligence collection – rather than preventing future pandemics.

Huff claims that the pandemic was caused by the US government’s funding of coronaviruses in China. China’s gain-of-function experiments were conducted with inadequate security, resulting in a leak at the Wuhan lab, he said. The Wuhan lab has been the centre of heated debates over the origins of COVID, with both Chinese government officials and lab workers denying that the virus originated there.

Mr Huff, who worked at EcoHealth Alliance from 2014 to 2016, stated that the non-profit assisted the Wuhan lab for many years in developing the “best existing methods to engineer bat coronaviruses to attack other species.” “China knew from day one that this was a genetically engineered agent,” Huff wrote. “The US government is to blame for the transfer of dangerous biotechnology to the Chinese.” I was terrified by what I saw,” he told The Sun, “We were just handing them bioweapon technology.” The Post also reports that according to a recent investigation published by ProPublica/Vanity Fair, the WIV is home to China’s riskiest coronavirus research. This research institute has been under immense pressure from the ruling Chinese Communist Party to produce scientific breakthroughs to raise its global status despite the lack of resources.