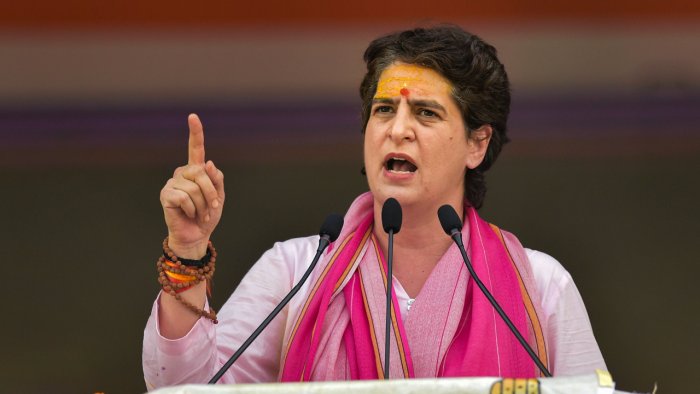 NEW DELHI, Oct 19: The Congress plans to give 50 per cent of the party ticket to the women candidates in the coming elections starting with 40 per cent seats kept reserved for women in the state Assembly elections in Uttar Pradesh early next year.

Declaring their first pledge for the upcoming polls, the All India Congress Committee (AICC) General Secretary Priyanka Gandhi Vadra on Tuesday announced to reserve 40 per cent party ticket for women for the 2022 Assembly election in UP. “In Uttar Pradesh, Congress will reserve 40 per cent tickets for women. It is our pledge that women will have full participation in the politics of Uttar Pradesh,” said Priyanka.

She, however, was non-committal about her contesting the UP elections or projecting a woman as the party’s chief ministerial candidate in the state. “I will have to fight [the elections] one day or the other,” she replied to a question about the possibility of her contesting the polls. Pressed further about whether it will be Amethi or Rae Bareilly, Priyanka said, “I have not taken the decision yet… I will let you know as and when the things develop,” she said. R

She kept deflecting questions about her contesting the elections in UP where she has been tasked with shoring up her party’s fortunes. Priyanka Gandhi is the general secretary in charge of Uttar Pradesh, where the Congress party could manage to win only seven seats in the 403-member House in the last assembly polls in 2017.

On Sunday, the Congress leader PL Punia, in-charge of the party affairs in UP, had clarified that Priyanka Gandhi would be the party’s face in the UP election campaign. “So, the people are impressed by her and currently in the entire state, no politician is more popular than Priyanka Gandhi. As far as around whom the campaign will be centred, we are fortunate that Priyanka Gandhi is available for (campaigning) all the time,” Punia said.

Questions about her electoral debut came as she announced the Congress would give 40 per cent of its tickets to women in the UP elections. As the 49-year-old was asked about whether she would choose Amethi or Rae Bareilly, which were once considered the party’s bastions in UP and were usually held by the members of the Gandhi family, she evaded a direct answer.

She was also not forthcoming on whether a woman would be projected as the Congress’ chief ministerial face in the state after her announcement about the allocation of seats to women. “I will tell you about this later when I want,” Priyanka, who has been visiting the politically crucial state regularly and hitting out at the BJP government in the state, said.

“There is no hidden meaning behind it. We want women in politics to become full-fledged partners in power. We have decided that in the upcoming assembly polls in Uttar Pradesh, the Congress party will give 40 per cent of tickets to women,” she said.

The announcement by the Congress leader was greeted with the bursting of firecrackers and slogan-shouting by the party’s women workers who were watching the press conference on a large screen installed in its office.

Asking more women to come and join the fight with her to change the politics of UP, Priyanka said the collection of applications for poll ticket has been extended till November 15. She also said she had wanted to reserve 50 per cent seats but after consultations with others, she decided to reserve 40 per cent for women. In UP, which has 403 Assembly seats, it would mean Congress will keep 160 tickets for women candidates.

Asked why 40 per cent, Priyanka said, “It is just the beginning and in the next election, it can be 50 per cent also. I announced it for Uttar Pradesh being the AICC General Secretary in-charge of the state and if other states want to follow, it is up to them.”

Asked if the decision leads Congress leaders to field their wives and other women members of the family, Priyanka said she doesn’t find anything wrong in it and added, it will usher in empowerment of women. She, however, added that the selection will be done purely on the basis of merit.

Citing examples of her meeting women during her visits to Uttar Pradesh in the last two years, Priyanka said, “The decision is for common women, for students of Allahabad University, who told me that there is bias in rules for girls. For women I met during the Ganga Yatra in Prayagraj who told me that they want to become politicians, the girl in Chandauli whose pilot brother was martyred, a girl in Lakhimpur who told me she wants to become the Prime Minister. A woman named Laxmi Valmiki in Lucknow and others.”

Priyanka said the decision has been taken to bring about a change in the politics of Uttar Pradesh and asked women to unite be it in social service, teaching or in the media. “Aap badalav chahti hain to intezar mat kariye. Aapki suraksha koi nahi karne wala (If you want a change, don’t wait. Nobody will protect you),” she said, adding, “politics of hate” can be changed by women through this decision.

Priyanka also asked other parties to charge their style of attacking her instead of mocking her visits as “politics of tourism.”