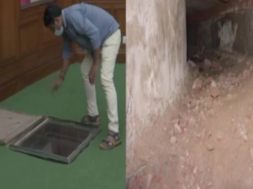 New Delhi: A secret tunnel-like structure has been found inside the Delhi Legislative Assembly on Thursday, linking it to the Red Fort.

Delhi Assembly Speaker Ram Niwas Goel said many knew about the existence of the tunnel and the gallows. “I decided to see it in the 75th year of India’s Independence.”

“However, we have discovered only the mouth of the tunnel. We will not dig further as metro projects and sewer installations have already destroyed the pathways,” he said.

Since the Legislative Assembly building is associated with India’s Freedom Movement, Goel hinted at converting the tunnel into a shrine of freedom fighters as a tribute to them and intends to open it for people.

“This place has a rich history. We would renovate it in a way that tourists and visitors can get a reflection of our history,” he added.