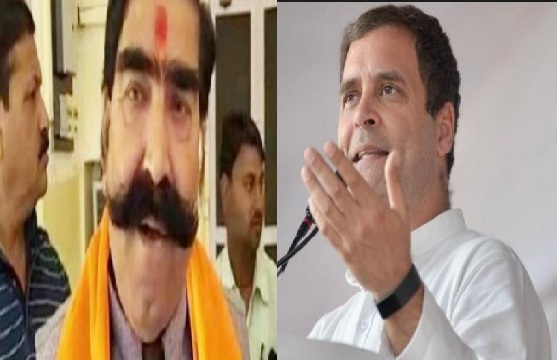 January 18, 2019 Revoi
Rajasthan BJP vice-president Gyan Dev Ahuja agitated controversy against the Congress President Rahul Gandhi by comparing him with Aurangzeb. He says “like Aurangzeb was the last emperor of Mughal kings, Rahul Gandhi is the last emperor of Congress. The end of the Congress era is certain.” Ahuja further claims that party should name the priest who conducted the ceremony for janeu dhari who wears the sacred threads and fools the people. Ahuja has been involved in several controversies in the past as well where he said that ‘cow slaughter is a bigger crime than a terrorist. Terrorist kill 2-3 people but when a cow slaughters, it hurts the sentiments of Hindu religion. He claims that BJP will win the by-election poll for the Ramgarh seat but it was called off due to the death of Bahujan Samaj Wadi party candidate Laxman Singh. He promised that his poll would focus on issues like cow slaughter, Hindutva, Ram Janmabhoomi. Meanwhile, he was campaigning ahead of the state assembly election, he called Congress candidate Sofia a “nagin”. And his party denied him the ticket and later he withdrew his nomination. In the last assembly, Ahuja was an MLA from Ramgarh. The by-poll for Ramgarh will take place on 28th January.
tags: aurangzeb COngress gyan dev ahuja Rahul Gandhi
previous RSS’s satire clarified, NaMo Government on edge!
next Karni Sena protests against Manikarnika’s release, threats to property
Related Posts