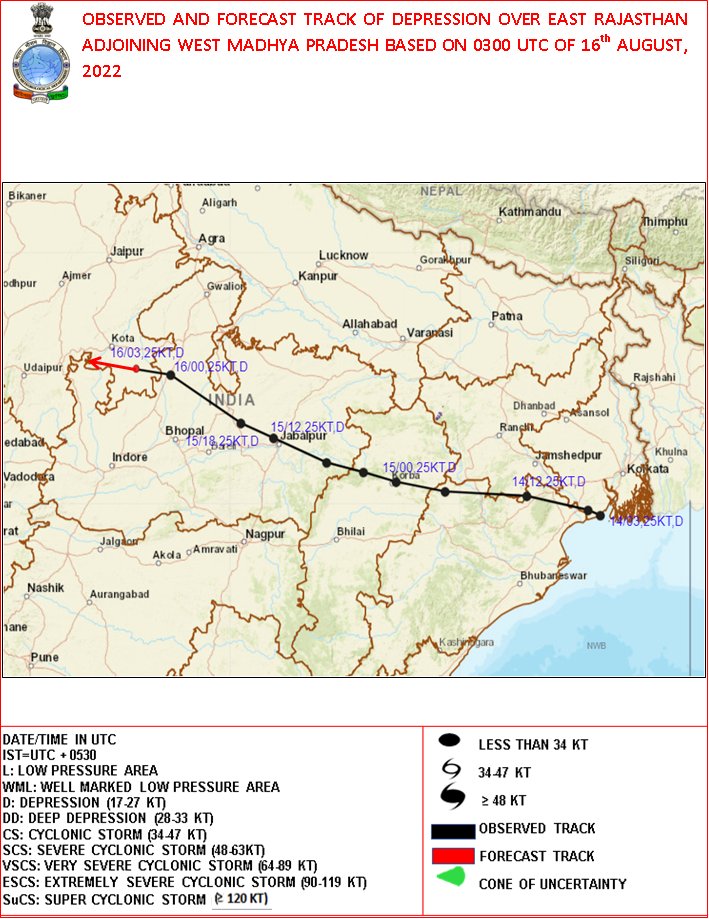 New Delhi: The India Meteorological Department (IMD) has been constantly monitoring the movement of the Bay of Bengal depression over the Indian mainland.

The department witnessed fresh developments in the depression that lies over east Rajasthan and western Madhya Pradesh on Tuesday, August 16, 2022.

According to the department, the depression was witnessed around 80 km southeast of the Kota district, in Rajasthan, near the Rajasthan-Madhya Pradesh border.

The IMD also predicted that the depression will weaken into a well-marked low pressure area within the next 12 hours.

Informing about the recent movement of the depression, the IMD wrote, “Depression over East Rajasthan and adjoining West Madhya Pradesh near latitude 24.70N and longitude 76.50E, 80 km southeast of Kota (Rajasthan).To continue to move West-Northwestwards and weaken gradually to a well marked low pressure area during next 12 hours.”

The depression travelled from the Guna district of Madhya Pradesh to Kota district within a span of four hours. “Depression lay centred at 0530 hours IST of today over West Madhya Pradesh close to Guna (Madhya Pradesh) and 160 km East-Southeast of Kota (Rajasthan).To weaken gradually to a well marked low pressure area during next 12 hours,” it said.

The depression originated in the Bay of Bengal and has been travelling West-Northwest over the Indian mainland. Once weakened into a well-marked low pressure area, the winds will felicitate precipitation in that region and adjoining areas.