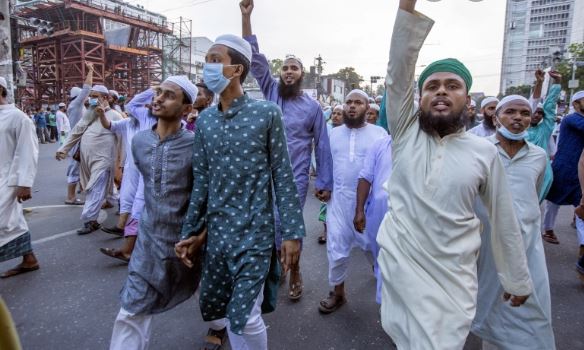 New Delhi: Bangladesh Police on Monday arrested 13 more suspects in major connection with the recent incidents of violence against Hindus in the country during Durga Puja. The police reportedly arrested Mamun Mondal – an activist of Islami Chhatra Shibir (the student affiliate of Jamaat-e-Islami), and Omar Faruk – a local cleric, on Sunday.

On the violence against Hindus, Bangladesh Prime Minister Sheikh Hasina on Sunday said that “Such communal incidents were being made to tarnish the country’s image. This is the propaganda of certain groups. Certain groups want to divide the country and are thus conducting unlawful attacks.”

However, PM Hasina did not name any particular group of individuals for the chaos.

Earlier, the Bangladesh PM had assured appropriate action against those responsible for the communal violence during Durga Puja. She had said that the ones who held the attacks will be hunted down and given “appropriate punishments.”

She had also directed Bangladesh’s Home Minister Asaduzzaman Khan to take “immediate” action against those involved in the “pre-planned” assaults.