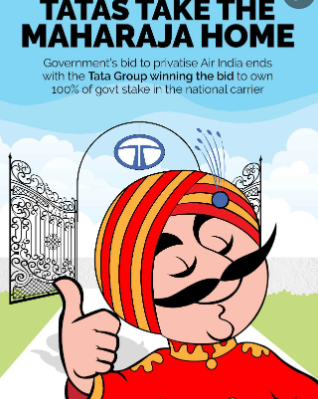 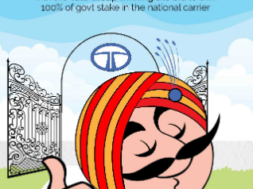 New Delhi: With the Government of India officially handing over Air India to the Tata Group on Thursday, the country’s premier airline returned to the venerable business house from where it had been taken over by the Centre some 70 years ago.

Tata Sons Chairman N Chandrasekaran said the group is thrilled to have Air India back in its fold.

Department of Investment and Public Asset Management (DIPAM) Secretary Tuhin Kanta Pandey told reporters that they have handed Air India over to its new owners, Talace Private Limited, a subsidiary of the Tata Group’s holding company, which had emerged as the successful bidder.

“Totally delighted that the takeover process of Air India is complete. We are very happy to have Air India back in the Tata Group. We look forward to working with everyone in creating a world-class airline,” Chandrasekaran said in New Delhi.

“I warmly welcome all the employees of Air India to our group, and look forward to working together,” he said.

Ahead of the official handover, Chandrasekaran called on Prime Minister Narendra Modi on Thursday. He also visited the Air India headquarters.

After a competitive bidding process, the Centre had, on October 8, 2021, sold Air India to Talace Private Limited, for Rs 18,000 crore.

The Tatas beat the Rs 15,100-crore offer by a consortium led by SpiceJet promoter Ajay Singh and the reserve price of Rs 12,906 crore set by the government for the sale of its 100 percent stake in the loss-making national carrier.

As the country’s first national career flying between Karachi and Bombay, JRD Tata had started Air India in 1932. However, after India’s Independence, the airline was nationalized in 1953 by the then Prime Minister, Pandit Jawaharlal Nehru.

“Best wishes to the new owners. I am confident that the airline will bloom under their wings, and pave the way for a thriving & robust civil aviation industry in India,” tweeted Civil Aviation Minister Jyotiraditya Scindia.

Reviving Air India, whose market share halved to less than 10 percent in 2021, will be a daunting task for the country’s biggest conglomerate in India, which already runs two other unprofitable carriers.

While Air India’s regional arm, Alliance Air, is not a part of the deal, the Tatas are also gaining control of low-cost, short-haul international carrier Air India Express and an equal stake in a ground handling company with SATS Ltd.

The Tatas won the airline in an October 2021 auction in which they had bid Rs 18,000 crore as an enterprise value for Air India, including taking on Rs 15,300 crore of its debt. Air India also has a highly unionized workforce, an aging and a mixed fleet of over 150 aircraft, potentially complicating a revival, according to media reports.

The holding company Tata Sons has yet to spell out its plans for the revival of Air India, which loses Rs 20 crore every day.

previous With an Eye on the Defense Strength of India, China Supplies Mounted Howitzer to Pakistan
next “Conditional Market Authorisation” Granted to Covishield, Covaxin
Related Posts