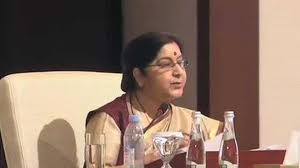 Terrorism is caused by ‘distortion of religion’ and ‘misguided belief: Sushma Swaraj at OIC meet

Terrorism is caused by ‘distortion of religion’ and ‘misguided belief: Sushma Swaraj at OIC meet

On Friday, External Affairs Minister Sushma Swaraj raised the issue of terrorism at the Organisation of Islamic Cooperation (OIC) meeting. She said the threat is due to “distortation of religion” and “misguided belief”.

Swaraj was presented as the guest of honour in the inaugural session of the 2 day meeting, delivered the speech in which she said fight is against the terrorism not a confrontation against any religion.

She did not address Pakistan directly.

Swaraj further stated to 57 powerful member grouping that “Islam literally means peace, none of the 99 names of Allah mean violence. Just like, every religion in the world stands for peace, compassion and brotherhood.”

Her statement came after the massive tension between India and Pakistan in the wake of Pulwama Terror Attack on February 14 by Pakistan based terror group Jaish-e-Mohammed that left 40 CRPF personnel dead.

It is for the first time that India has been invited to a meeting of the OIC, an influential grouping of 57 Islamic countries, as the guest of honour.

Pakistan Foreign Minister Shah Mahmood Qureshi did not attend the meeting due to the failure of the grouping to repeal the invitation to Swaraj.

“Terrorism and extremism are two different names and labels but it uses varied causes. In both case, it is driven by distortion of religion and a misguide belief in its power to succeed.” Swaraj told the leaders of the major Muslim countries.