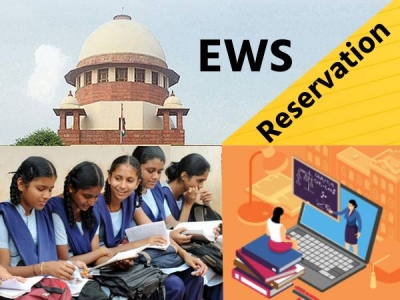 NEW DELHI, Dec 7: Challenging the majority judgement of the Supreme Court upholding 10 per cent reservation for the Economically Weaker Sections (EWS) among the unreserved categories, the All India Backward Classes Federation on Wednesday filed a review petition in the apex court.

The review petition said the majority opinions of three judges on the Bench considering only the issue whether reservation structured solely on economic grounds violated the Basic Structure of the Constitution as EWS reservation was for a social- and educational class, the forward class amongst them, with a creamy layer cut-off.

“Whereas the fact is that an economically weaker section eligible for EWS is formed by two criteria: a) family income and other indicators of economic disadvantage and b) it shall not be Other Backward Classes (OBC), Scheduled Castes (SC) or Scheduled Tribes (ST),” the petition said.

The petition said the judgment had upheld the “division of the population of India for purposes of reservation into mutually exclusive compartments, which is fundamentally destructive of the basic structure principle of fraternity.” The majority opinions had erroneously made a distinction between weaker sections and backward classes. The petition pointed out that the majority decisions had failed to consider the contention of the petitioner that affirmative action for forward castes/classes was a violation of the basic structure of the Constitution.

It argued that the judgment did not address its contention that reservation could be only used narrowly as a tool for representation, to enhance equality by breaking social monopolies and oligarchies in State institutions and that its use for any other purpose (such as an employment/education scheme) would violate the Basic Structure and Equality and Social Justice Codes of the Constitution.

The DMK, the ruling party in Tamil Nadu, had also filed a review petition against the EWS judgment contending that the majority opinions had relied on the erroneous assumption that EWS reservation was for sections of the population that had not received benefit of reservation in public employment and education.

previous Taming inflation: RBI hikes repo rate by 35 bps to 6.25%, revises GDP growth in FY23 at 6.8%
next SC Asks the Centre to Place Before it “Relevant Documents” related to 2016 Demonetisation
Related Posts