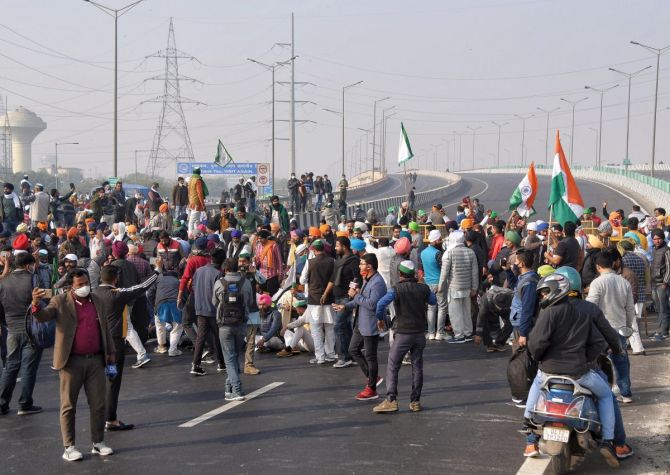 NEW DELHI, Oct 21: The Supreme Court on Thursday again made harsh comments against the farmers’ agitation leading to the blockade of the roads around Delhi and also asked the government to find out a solution quickly to the nearly year-long protest dharna.

The apex court acknowledged that the farmers do have a right to protest but they cannot block roads indefinitely. The apex court granted three weeks’ time to farmer unions — leading the nearly year-long agitation along the borders of Delhi and elsewhere against the three central farm laws — to file their response on a petition seeking removal of the protesters from the roads. The court posted the matter for further hearing on December 7.

The court was hearing a petition filed by a resident of Noida, urging that the protesters be removed from the roads around the national capital region.

“Ultimately some solution has to be found. We are not averse to their right to protest even when a legal challenge is pending, but roads cannot be blocked,” the court stated. Earlier as well, taking a grim view of the continuing blockade of highways connecting the national capital to the neighbouring states by farmers protesting against the farm laws, the apex court had said the roads cannot be blocked perpetually.

“Redressal can be through judicial form, agitation, or parliamentary debates. But how can highways be blocked and this happen perpetually? Where does it end?” Justices S K Kaul, who was heading a two-judge bench, remarked.

The farmers’ side, represented by senior advocate Dushyant Dave and advocate Prashant Bhushan, blamed the State for deliberately blocking the roads in order to turn public sentiments against them. They said the protesters should be allowed to enter Ram Lila Maidan and Jantar Mantar in the heart of the capital to continue their protests against the agricultural laws.

Countering, Solicitor-General Tushar Mehta, for the State of Haryana, reminded the court about the Red Fort violence in January, which left several hundreds injured and others killed.

The bench acknowledged that “there is a problem with movement, we are not going to accept there is no problem” but said a solution needed to be found between the farmers and the government.

The court said it had already laid down the law in the Shaheen Bagh protests case that the right to protest should not hamper the right to movement of the public. “The law is laid down. There is no reason for the SC to lay down the law again and again… Ultimately, some solutions have to be found — roads cannot be blocked…” Justice Kaul noted.

Dave said the right to protest was a fundamental right. The roads were blocked by the police. The senior lawyer took on a combative tone that the government’s view on violence by protesters seemed to be skewed. He asked why farmers were not being allowed at Jantar Mantar when Tuesday saw massive protests organised by the ruling BJP in the area over the attack on Hindus in Bangladesh during Durga pooja. “The solution is to allow us to agitate at Jantar Mantar…” Dave said.

“Last time they came, it became a serious issue… something much more than a serious issue,” Mehta submitted. The law officer insinuated that “sometimes it is felt the farmers’ agitation is not for the cause but for something else…” Dave retorted that the farmers felt the same way about the government’s agricultural laws. “We also feel that the farm laws are not for the farmers but for something else… If you are going to make allegations against the farmers, we will make allegations against you,” Dave turned to the Solicitor-General. He repeated that the only solution to the problem would be to allow farmers entry to the Ram Lila Maidan.

Mehta said the Ram Lila Maidan “has become a permanent residence for many.” He referred to how there was material to suggest that the protests were funded by anti-national elements.

So far, only four out of 43 farmers’ bodies and leaders have responded to the top court’s notice on a plea by a Noida resident to remove the blockades.

Dave told the Bench that a similar case was being heard by another Bench of the Supreme Court and this case should be transferred there. The court issued notice on new petitions filed by other private citizens seeking the removal of the blockades.