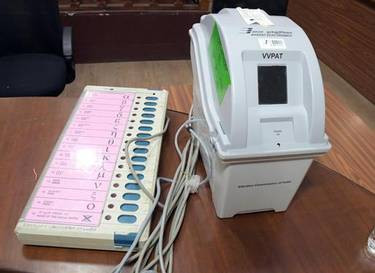 The Election Commission (EC) of India on Friday told the Supreme Court that any change in the present method of counting voter-verified paper audit trail (VVPAT) slips at this stage may not be feasible.

Responding to a petition filed by 21 opposition leaders demanding 50% of VVPAT slip verification in each assembly segment of a Lok Sabha constituency, the poll panel said, “Polling is to commence from April 11, 2019; to now seek to alter the system adopted by the Election Commission of India at this stage might not be feasible.”

VVPAT, which is attached to an electronic voting machine ()EVM, allows a voter to audit whether the vote cast has gone to the candidate he/she intended to.

Currently, the EC counts VVPAT slips from a randomly-selected polling station per assembly segment in case of Lok Sabha polls.

The Supreme Court had earlier this week favoured the suggestion by various political leaders to increase the count of VVPAT slips and had asked the EC to give its view if the same can be done for the “satisfaction of the electorate”.

A bench led by the Chief Justice of India Ranjan Gogoi had said, “No institution, including judiciary, can insulate itself from suggestion for improvement.”

In the past, politicians and parties have approached high courts and the apex court on the issue of increasing VVPAT count, but the courts have not interfered with the poll body’s decision.

The poll panel in its affidavit filed on Friday said, “On an average, it takes one hour for VVPAT slip count of one polling station”. If the number is increased to 50% of the total assembly constituency, it would take at least 5 days, the EC said. The commission also argued that the present petition “does not raise any new or different apprehension or grievance as was raised in the earlier cases, nor brings out any grave or serious reason requiring a revamping of the system that has been adopted by the Election Commission of India for the purpose of the conduct of the 2019 elections”.

“Election Commission of India is committed to ensuring a free and fair election…,” the EC said. “

“VVPATs have been used by the Election Commission of India, since 2013, in 1628 Assembly Constituencies and 21 Parliamentary Constituencies. During this period, only once has any complaint been made by a voter alleging that his/her vote did not go to the candidate he had pressed the button in favour of,” said the poll panel.