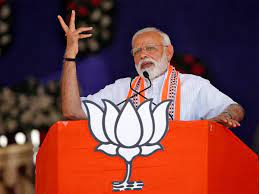 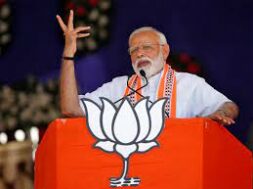 NEW DELHI, Nov 24: The Prime minister Narendra Modi accused the Congress of deliberately neglecting the development of villages and claimed that the Congress governments in Gujarat in the past “actually enjoyed” the rift between the rural and urban centres.

Addressing a series of election rallies in poll-bound Gujarat, his home state, on Thursday, Modi said when in power the Congress neglected the villages and never followed the values propounded by Mahatma Gandhi who always maintained that India’s soul lived in villages.

Modi was speaking at campaign rallies for the BJP in Dehgam, Bavla and other centres in north and central Gujarat regions on the second day of his two-day campaign in the state. “Mahatma Gandhi used to say that the soul of India resides in its villages. But Congress leaders never cared to follow such Gandhian values. They actually crushed that soul. Villages remained neglected and their true potential was never realised,” he said, and added that the rift between villages and cities only widened under the Congress governments which even “enjoyed the conflict between the two.”

Cautioning people to cast their votes judiciously, Modi said the current elections would not only elect a government for five years, but would also decide the fate of Gujarat for the next 25 years. Modi said, “India has completed 75 years of Independence and our nation is entering the Amrit Kaal, which will be the next 25 years. This (2022) is the first election of this Amrit Kaal, which will decide the state’s fate not just for the next five years, but what Gujarat will be like after 25 years.”

PM Modi said that we have to work in a manner so that Gujarat was ahead in the standards of rich countries of the world.

Modi, a former chief minister of his home state, maintained that rapid strides the state made in development had changed many values that were normally discussed during an election. “Earlier there was a time when there was talk of corruption, casteism, nepotism, road-electricity-water-health issues in elections but due to the overall development that Gujarat has achieved in the last 20 years, Gujarat has come out of such crises. 20 to 25 years ago, works for the development of basic facilities in Gujarat were done but today the Gujarat is known as a leading state in the country.”

Hailing the developments in Gujarat, Modi said, “Today, 24 hours electricity is available in Gujarat. Work of Sardar Sarovar Dam, Sujalam Suflam Yojana, Amrit Sarovar have been done. Village-to-village roads have been improved, optical fibre has been extended.” “The education budget in Gujarat which was Rs 1,500 crore, has today increased to Rs 33,000 crore,” he said.

“It is difficult to differentiate between cities and villages in Gandhinagar district,” he added. “The day is not far when Gandhinagar and Dehgam will be twin cities, Gandhinagar and Kalol will be twin cities and Dehgam, Kalol and Gandhinagar will become big centres for strengthening the economic condition of Gujarat,” he said. Targeting Congress, Modi said, “Congress will come during the election and say that Narendrabhai is like this… he is like that… but Congress has no idea what the future of Gujarat should be like.”

Modi said, “While we are working for a developed
Gujarat, we have to break all the old records and get 100 percent voting to support lotus and support development.” Gujarat, which has 182 assembly constituencies, will go for polling in two phases on December 1 and 5. The counting of votes will be taken up along with the counting in Himachal Pradesh where a single phase polling was held on November 12.