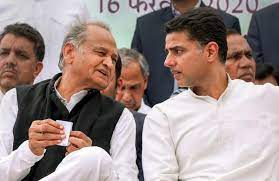 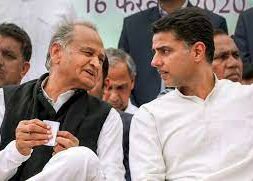 NEW DELHI, Nov 24: The rift between the Rajasthan chief minister Ashok Gehlot and his bete noir Sachin Pilot seems to have reached the point of no return. Any possibility of a rapprochement between the two was virtually killed by Gehlot on Thursday when he repeatedly called his former deputy a “traitor” and ruled out accepting him as his successor if he was to be moved out.

Pilot, who accompanied Rahul Gandhi and Priyanka Gandhi on the Madhya Pradesh leg of the Bharat Jodo Yatra has so far refrained from commenting on Gehlot’s remarks but he has kept pushing the party high command for a decision on chief minister’s post as was promised by the party leadership earlier when the supporters of the chief minister had rebelled against the AICC observers when Gehlot’s name was proposed for the post of the Congress national president.

Gehlot on Thursday called Pilot a “gaddar” (traitor) on Thursday and said he cannot replace him as he revolted against the Congress and tried to topple his own party government for the benefit of the BJP The remarks have further widened the fissures within the Rajasthan Congress with less than a year to go for the Assembly elections and Gandhi’s Yatra set to enter Rajasthan after passing through MP.

Mr. Gehlot also alleged that Union Home Minister and senior Bharatiya Janata Party (BJP) leader Amit Shah was involved in Mr. Pilot’s rebellion, when some Congress MLAs loyal to him were holed up in a Gurugram resort for more than a month and Union Minister Dharmendra Pradhan visited them often, claiming that he has proof that an amount of ₹10 crore was paid to each of those legislators, including Pilot.

The veteran leader also said the Congress can replace him with any of its 102 MLAs in Rajasthan except Mr. Pilot if the top leadership feels that the prospects of the party would improve in next year’s Assembly polls.

“A gaddar (traitor) cannot be Chief Minister,” he said, “the High Command cannot make Sachin Pilot the Chief Minister… a man who doesn’t have 10 MLAs, a man who revolted, he betrayed the party, (he) is a traitor.”

He was perfectly inclined to elaborate. “It must be a first for India that a party president tried to bring down his own government,” he said of Mr Pilot’s ill-famed revolt in 2020, a revolt which, Mr Gehlot said, without offering any evidence, “was funded by the BJP” and enabled by senior BJP leaders including Amit Shah.

“The MLAs will never accept someone who has revolted and has been dubbed as a gaddar. How can he become the chief minister? How can the MLAs accept such a person as the chief minister? I have proof that ₹10 crore each were distributed to the MLAs holed up in a Gurugram resort for toppling the Congress government in Rajasthan,” Mr. Gehlot said. He said one will never find an example where a party president “tries to topple his own government.” Pilot was the state Congress president besides being the deputy chief minister then and had lost both the offices following the unsuccessful bid to overthrow Gehlot ministry.

Rajasthan BJP chief Satish Punia has, however, denied the charge that the saffron party was involved in paying money to Congress legislators in 2020 to defect. Mr. Gehlot said if Mr. Pilot had apologised to the MLAs and won them over, things would have been different.

“Till now, he has not apologised. If he had apologised, I would not have had to apologise,” the Chief Minister said, referring to his apology to former Congress chief Sonia Gandhi after more than 90 MLAs rebelled against the AICC observers. He said it was not a rebellion but a “revolt against Mr. Pilot who tried to topple his own government”.

The BJP described Mr Gehlot’s claim as baseless. “The Congress leadership has failed to put their house in order. The Congress is losing Rajasthan, that’s why Gehlot is frustrated. Gehlot is blaming BJP for his failure,” said Punia.

After Mr Pilot returned to the Congress, downsized but still an aspirant to the top job in Rajasthan, there was some sort of uneasy calm. Till August, when Sonia Gandhi, who needed to find a successor as party president, leaned on Mr Gehlot to take the job. He made it clear that this was not an offer that interested him – nevertheless, he suggested, after days of trying to fob it off, he could perform it if he were allowed to remain Chief Minister. So, two posts for him. The rebuke was quick. Rahul Gandhi publicly said “one man one post” was the party dictum.

Mr Gehlot emphasized throughout his conversation that his allegiance to the Gandhis is career-long. “Whatever I have is because of them,” he said. The principal players who organised the meeting in his support in September were to be punished, the party said, but that remains an unfulfilled threat, as Mr Pilot complained a few days ago (his outbursts against Mr Gehlot have become a recent pattern).

When asked to reflect on the root cause of his problems with Mr Pilot, the Chief Minister said he’s at a loss. In fact, he claimed, in 2009, when the UPA was elected for a second term, it was he who recommended that the junior politician be made a union minister.

The fundamental issue, as far as Mr Pilot is concerned, is that the Congress had, upon winning Rajasthan in 2018, vowed that the job of Chief Minister would be rotated between him and Mr Gehlot with the latter getting first dibs. Mr Pilot says he has been sidelined consistently by Mr Gehlot, who he says, at one time tapped the phones of his supporters, to choke them politically.

Mr Gehlot says he has never understood the oft-stated charge by Mr Pilot of “sidelining him”. He also says it is a fallacy that Mr Pilot was promised an equal term as Chief Minister. “The question does not arise. But if he (Pilot) still says it, then ask Rahul Gandhi (if this condition was ever established).”

Meanwhile, a Gurjar leader, Vijay Singh Bainsla, threatened to oppose Rahul Gandhi’s ‘Bharat Jodo Yatra’ in Rajasthan unless Sachin Pilot is made the CM. Despite so, Pilot refused to side with the Gurjar leader’s claim, and said the BJP was trying to create disturbances. “No matter how hard the BJP tries, the yatra will be successful,” Pilot had said when asked about Bainsla’s threat.