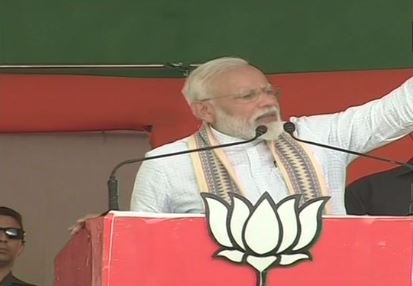 To reap a better support to NDA candidates Ajay Nishad of the BJP and Veena Devi of the LJP, from Muzaffarpur and Vaishali Lok Sabha constituencies respectively.

Prime Minister Narendra Modi in Muzaffarpur said, “After the elections in four phases, some people are disturbed. Now, you have to decide how big their defeat will be and how epic our victory will be. Those who had changed the identity of Bihar, are not fighting to form their government at the Centre, but to increase the number of their candidates. Increasing their strength means bringing back the days of loot, corruption, kidnapping.”

PM Modi: They want to prove their self-interest by dividing Bihar on the basis of caste, society

Taking on the RJD, PM Modi said, “Increasing their strength means kidnapping of daughters, vandalism, murders, corruption in every scheme. To increase their strength means to be imprisoned in their own home after sunset, to be choked and to be forced to flee. They want to prove their self-interest by dividing Bihar on the basis of caste, society. They want to hide the corruption done by them. Their goal is to make weak government in Delhi so that they can do whatever they want.”

PM Modi: They will have to pay back every penny they looted from the poor

PM Modi said, “They will have to pay back every penny they looted from the poor. Like we brought Christian Michel, others involved in corruption would be brought back too. It is important to understand the minds of this Mahamilawatis.”

Whoever poses threat to India, will strike them at their home: PM Modi at Muzaffarpur

PM Modi said, “When terrorism thrives, no one remains safe, be of any race or creed. Whether it is within the country or across the border, the factory which will create terror and violence is on the target of this watchman. Whoever poses a threat to India, will strike them at their home. There has been a history of these mahamilawatis that they can not act against terrorism. Their legs shake after hearing Pakistan’s name. That’s why they are allergic to air strikes and surgical strikes.”