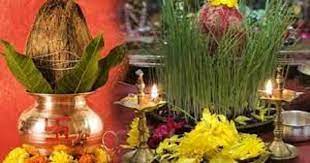 New Delhi: The Sharad Navaratri is dedicated to the worship of goddess Adishakti Durga. This year the festival began on Monday, September 26, 2022, and ends on Wednesday, October 05, 2022.

This year the festival began in two auspicious yogas or timings according to the Hindu calendar. Though practiced across the country, Kalash Sthapana or Ghatsthapana is primarily observed in Maharashtra.

Hindus across the Indian subcontinent invoke and welcome the goddess by setting up a Kalash or a Ghat in their homes. People often worship the deity, sing hymns, and hold venerations along with a period of intermittent fasting during the nine days.

The Navaratri 2022 will be observed from Ashwin Shukla Pratipada to Dashami.

People established the earthen pots and performed a recitation from 07:43 am to 09:54 am on Monday in the Uttara-Phalgui Tadupari Hastra Nakshatra. This is the first auspicious time for setting up the Kalash.

According to Hindu astrophysics and scriptures, the best time for establishing a Kalash falls in the Abhijit Yoga. The Abhijit auspicious timings were estimated to fall between 11.28 and 12.24 in the afternoon, as per the Kashi Vishwanath Rishikesh Panchang.

Establishment of Kalash in this yoga is believed to bring about happiness, peace, stability, wealth, grain, prosperity.

Though the Navaratri festival this year began in the  Dwipushkar Yoga and Yayijaya Yoga, with the gradual formation of Shukla yoga and Brahma yoga. All these yogas are considered auspicious and prosperous.

The three-day worship of the goddess also decides the vehicle upon arrival of Durga, keeping the Pratipada or first day of the festival in mind.

Since the seventh day of the festival or Saptami falls on a Sunday and the tenth day falls on a Wednesday, the goddess is believed to arrive to the Earth on an elephant. Riding an elephant indicates good rain, which will in turn increase happiness and prosperity.

People who resolved to establish a Kalash this year are supposed to bathe and meditate in the morning before preparing an altar with sandy soil. They then add Saptadhanaya in the altar and make a swastika on the Kalash. The pot is filled with Ganga water.

Vedic matras are chanted to the Kalash before invoking the goddess and establishing her in the Kalasha. While taking a resolution during the Kalash sthapana, people are expected to take the name of the country, time of establishing the Kalash, the lineage name or Gotra, pravara, etc.

It is believed that goddess Durga visits her maternal home, the Earth, for nine days – thereby celebrating Navaratri. However, her vehicle of arrival is not fixed and depends upon the seventh day or the Saptami. The day when the Saptami falls on determines the vehicle of the goddess.