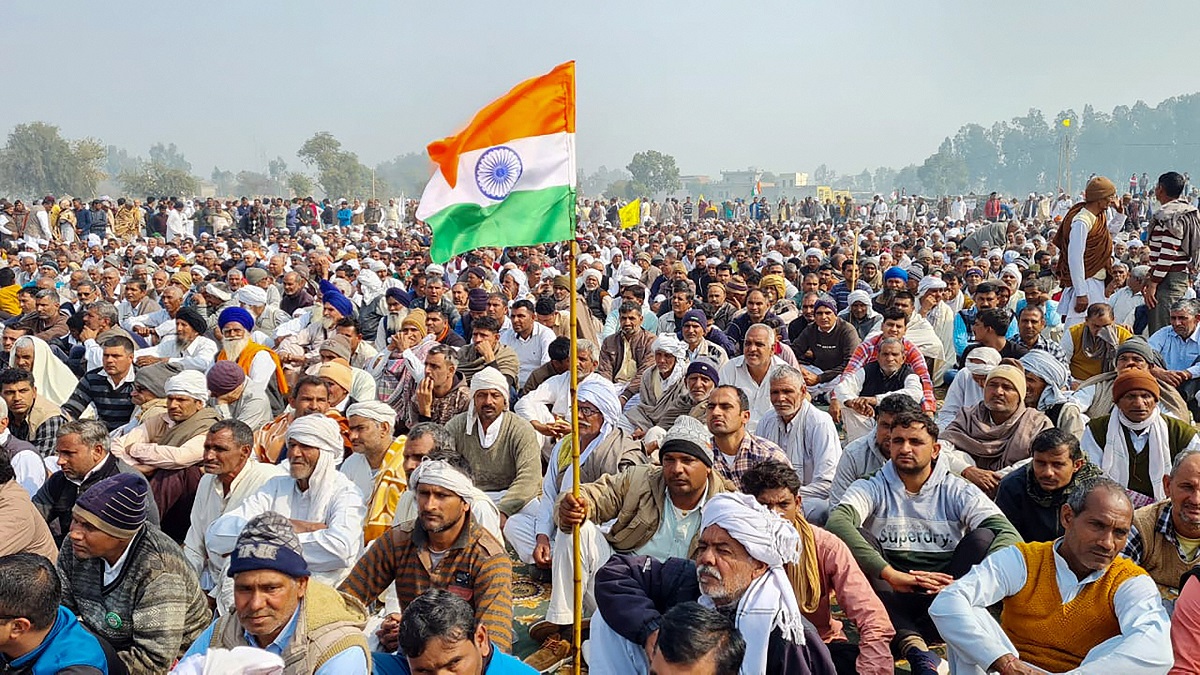 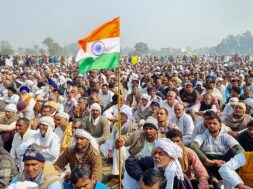 NEW DELHI, Sept 7: After their mega show in Muzaffarnagar in Uttar Pradesh on Sunday where more than a lakh of farmers from different parts of the country had assembled, it was yet another jamboree of the protesting farmers in Karnal in Haryana on Tuesday where a large numbers gathered for a “mahapanchayat.”

Even as the local authorities braced themselves for a possible “gherao” of the district headquarters by protesters, the farmer leaders announced that the talks between the farm leaders and officials failed to yield any result. Farmer unions had demanded action against officials over the lathi charge against protesters on August 28 in Karnal. Otherwise, they had threatened, farmers would lay siege on the Karnal mini-Secretariat.

A large number of farmers from across several districts of Haryana and the neighbouring states gathered in Karnal’s ‘anaj mandi’ on Tuesday following the call issued by SKM to gherao mini-secretariat of the district in protest against the police lathi-charge on the farmers at Bastara toll plaza on August 28. Several farmers and police personnel had sustained injuries in the incident on August 28.

As farmers gathered for the mahapanchayat, an 11-member delegation was invited by the local administration to discuss their demands and dissuade them from marching towards the secretariat.

“The administration did not agree to our demands,” Haryana Bhartiya Kisan Union [Chaduni] leader Gurnam Singh Chaduni told reporters three hours after the talks began. He said the talks had failed to yield results. “Now, the next course of action will be decided at the mahapanchayat,” he said when asked if the protesters will go ahead with their plan to gherao the district headquarters, a few kilometres away.

BKU leader Rakesh Tikait told reporters that they had demanded the suspension of the IAS officer who was caught on tape allegedly telling policemen to “break heads” of protesting farmers if they crossed the line.

Farmers from Punjab, Haryana and Uttar Pradesh have been protesting for months over the three farm laws enacted at the Centre, claiming that the legislation will lead to the erosion of the minimum support price (MSP) system.

Deputy Commissioner Nishant Kumar Yadav, Karnal’s Inspector General of Police Mamta Singh and Superintendent of Police Ganga Ram Punia, were among the officials who took part in the talks with the farm leaders.

Balbir Singh Rajewal said discussions with the district administration have failed despite three rounds of talks. He added that farmers will not break any police barricades, but will continue with their decision to gherao mini-secretariat. He further said that farmers will not indulge in any law and order disruption and in case cops try to stop them, they will court arrest.

Swaraj India chief Yogendra Yadav tweeted to say that the Haryana police had detained several farm leaders including himself and Rakesh Tikait from Namaste Chowk but were released later.

The government has said it would not allow the march and has deployed over 40 companies of police and other security forces. Mobile, internet and SMS services we suspended in five districts and barricades have been set up. Camera-fitted drones were used as part of security measures,

Tikait tweeted to say that the kisan mahapanchayat and the protest march were “to seek justice” for Sushil Kajla who the farmers claimed died of injuries sustained in the lathi charge on farmers on August 28. The police, however, have refuted the charge and claimed that he died of cardiac arrest.

The Samyukt Kisan Morcha, an umbrella body of around 40 farmer unions spearheading the ‘ agitation against the centre’s farm laws, gave the call for today’s protests to back its demand for repeal of the laws and an FIR against officials who ordered the lathi charge.

The SKM has slammed the August 28 “brutal police action” and demanded a case against Karnal SDM Ayush Sinha, who was caught on video telling cops to “break farmers’ heads if they tried to “cross the line.”

Meanwhile, the Bharatiya Kisan Sangh, the farmers’ body of the BJP, said it would hold demonstrations at district centres in the country on September 8 demanding profitable prices to all farmers equally, said the BKS general secretary Badrinarayan Choudhary. He said, “Whatever is earned by farmers in growing crops should be ensured to them. The government should either give a profitable price or explain to us why our demand is wrong. The current MSP is a fraud. There should be a law for MSP.”