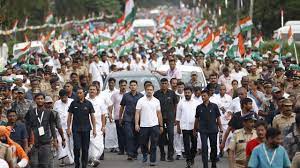 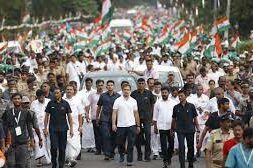 NEW DELHI, Nov 25: The BJP has again alleged that ‘Pakistan Zindabad’ slogan was raised during Congress leader Rahul Gandhi’s ‘Bharat Jodo Yatra’ when it passed through Khargone in Madhya Pradesh on Friday. The Congress has promptly refuted the allegation claiming that the BJP was “circulating” some “fake videos” to defame the Congress and Rahul Gandhi.

The BJP’s IT cell chief Amit Malviya alleged that the slogan was given during Rahul’s padayatra in Khargone in Madhya Pradesh on Friday. However, Congress leader Jairam Ramesh has accused the BJP of spreading fake videos on Twitter.  Amit had posted a video of Rahul’s ‘Bharat Jodo Yatra’ in Khargone with the script, “Pakistan Zindabad slogans are heard in Khargone soon after Richa Chadha’s plea to join Rahul Gandhi’s Bharat Jodo Yatra (listen to end of video). The MP Congress posted the video and later deleted it as the matter came to light. This is the real face of Congress.”

The MP chief minister Shivraj Singh Chouhan also took cognisance of the matter and threatened strict action against the mischief makers. He said, “Slogans of ‘Pakistan Zindabad’ raised in ‘Bharat Jodo Yatra.’ India has been divided before too, is there an intention to divide India again? Strict action will be taken against those who raised slogans.”

A controversy erupted after BJP state president VD Sharma and other party leaders posted a 34-second video of the yatra on social media claiming that ‘Pakistan Zindabad’ slogans were raised at the rally.

Attacking the Congress, Sharma said, “In Rahul Gandhi’s Bharat Jodo Yatra, slogans of ‘Pakistan Zindabad’ were shouted in Khargone. It again exposed the mentality of Congress to divide the country. It is being proved time and again that this is a ‘divide India journey’. Rahul Gandhi should apologize to the country for this act.”

Communal riots had erupted in April this year in Khargone after people pelted stones on a procession of Ram Navmi for allegedly playing objectionable songs. The riot led to the death of one person, while dozens were injured and more than 200 arrests were made.

However, Congress denied that claim saying the video was doctored. Hitting back, Congress’ general secretary in-charge of communications Jairam Ramesh said a video ‘doctored’ by the dirty tricks department of the BJP is doing the rounds to discredit the ‘highly successful’ Bharat Jodo Yatra. “A doctored video is doing the rounds to discredit the Bharat Jodo Yatra” Ramesh said and added that there will be a “payback.” “We are taking the necessary legal action immediately. We are prepared for such tactics, and there will be payback,” Jairam Ramesh said in a tweet.

“Seeing immense public support for the Bharat Jodo Yatra, the agitated BJP has played an edited video to defame the Yatra and Rahul Gandhi. We are taking legal action against it. We are ready for such heinous tactics of the BJP. A befitting reply will be given,” said Jairam Ramesh.

Youth leader Kanhaiya Kumar, who joined Congress in 2021 in presence of Rahul Gandhi, also hit out at BJP saying this is their old strategy to defame people by using doctored videos. Further slamming BJP over the issue of inflation, he said, “The prices of petrol are skyrocketing, inflation is increasing by the day, people are not getting employment but BJP is busy in hatching conspiracy. We are already ready for this.”

Rahul Gandhi has been attacking the BJP-led state government and central government over many issues including tribal, unemployment and spreading hatred through this mass movement. The yatra will enter Rajasthan from Madhya Pradesh on December 4, after covering a distance of 380 km.