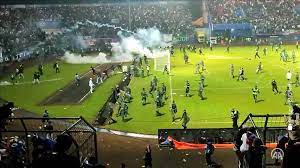 NEW DELHI, Oct 2: In one of the worst sports tragedies in the world, at least 174 people died at an Indonesian football stadium when thousands of angry home fans invaded the pitch, clashed with police and rival fans and subsequent stampede as police responded with tear gas shelling to control the unruly crowd.

The tragedy on Saturday night in the eastern city of Malang, which also left over 180 injured, was one of the world’s deadliest sporting stadium disasters.

After the match between Arema FC and Persebaya Surabaya had ended with the home team Arema FC losing by 3-2, angry supporters of the losing team invaded the pitch and police had fired tear gas, triggering a stampede and cases of suffocation, East Java police chief Nico Afinta told reporters. We would like to convey that… not all of them were anarchic. Only about 3,000 who entered the pitch,” Afinta said.

Indonesia’s chief Security Minister Mahfud MD. said the number of spectators exceeded the capacity of the stadium. In an Instagram post, he said 42,000 tickets had been issued for a stadium that had a capacity to hold 38,000 people.

Police, who described the unrest as “riots”, said they tried to force fans to return to the stands and fired tear gas after two officers were killed. Many of the victims were trampled or choked to death, according to police.

Survivors described panicking spectators in a packed crowd as tear gas rained down on them.

“Officers fired tear gas, and automatically people were rushing to come out, pushing each other and it caused many victims,” some eye-witness accounts said. They blamed the police resorting to teargas shelling caused the stampede and the consequent deaths. “Nothing was happening, there was no riot. I don’t know what the issue was, they suddenly fired tear gas. That’s what shocked me, didn’t they think about kids, women?” some surviving spectators said.

President Joko Widodo ordered an investigation into the tragedy, a safety review into all football matches and directed the country’s football association to suspend all matches until “security improvements” were completed. “I deeply regret this tragedy and I hope this football tragedy will be the last in our country,” Widodo said.

Images taken from inside the stadium during the stampede showed police firing huge amounts of tear gas and people clambering over fences. People were carrying injured spectators through the chaos.

Video footage circulating on social media showed people shouting obscenities at police, who were holding riot shields and wielding batons. Torched vehicles, including a police truck, littered the streets outside the stadium on Sunday morning. Police said 13 vehicles in total were damaged.

Fan violence is an enduring problem in Indonesia, where deep rivalries have previously turned into deadly confrontations. There have been previous outbreaks of trouble at matches in Indonesia, with a strong rivalry between clubs sometimes leading to violence among supporters. Arema FC and Persebaya Surabaya are longtime rivals.

Indonesia’s coordinating minister for political, legal and security affairs, Mahfud MD, said organisers ignored the recommendation of authorities to hold the match in the afternoon instead of the evening. And he said the government had recommended only 38,000 tickets be printed, but there was instead a sell-out crowd of 42,000.

“The government has made improvements to the implementation of football matches… and will continue to improve. But this sport, which is a favourite of the wider community, often provokes supporters to express emotions suddenly,” he said in an Instagram post. Before Widodo’s announcement, the Football Association of Indonesia (PSSI) suspended football matches of Indonesia’s top league, BRI Liga 1, for one week. It also banned Arema FC from hosting home games for the rest of the season.

“The football world is in a state of shock following the tragic incidents that have taken place in Indonesia at the end of the match between Arema FC and Persebaya Surabaya at the Kanjuruhan Stadium,” FIFA president Gianni Infantino said.

“This is a dark day for all involved in football and a tragedy beyond comprehension. I extend my deepest condolences to the families and friends of the victims who lost their lives following this tragic incident,” he added. “Together with FIFA and the global football community, all our thoughts and prayers are with the victims, those who have been injured, together with the people of the Republic of Indonesia, the Asian Football Confederation, the Indonesian Football Association, and the Indonesian Football League, at this difficult time.”

World soccer’s governing body FIFA specifies in its safety regulations that no firearms or “crowd control gas” should be carried or used by stewards or police. East Java police did not immediately respond to a request for comment on whether they were aware of such regulations.

FIFA has requested a report on the incident from Indonesia’s PSSI football association, and a PSSI team has been sent to Malang to investigate, PSSI secretary general Yunus Nusi told reporters. Indonesia’s human rights commission also plans to investigate security at the ground, including the use of tear gas, its commissioner said.

Rights group Amnesty International urged Indonesia to investigate the use of tear gas at the stadium and ensure that those found in violations are tried in open court.

The Malang stadium disaster appeared to be the deadliest since 1964, when 328 people were reported dead in a riot and crush when Peru hosted Argentine at the Estadio Nacional.

In an infamous 1989 British disaster, 96 Liverpool supporters were crushed to death when an overcrowded and fenced-in enclosure collapsed at the Hillsborough Stadium in Sheffield.

Later in the evening, the death toll in the tragedy was scaled down to 125 by the Indonesian government officials. East Java Deputy governor Emil Dardak said the data cross- checked from 10 hospitals in the area showed there were 125 fatalities and not 174 as the officials earlier had stated, he said.

previous Rajasthan: Teen Gang Raped, Blackmailed for Months
next Kharge Refuted he is being Backed by Gandhis
Related Posts