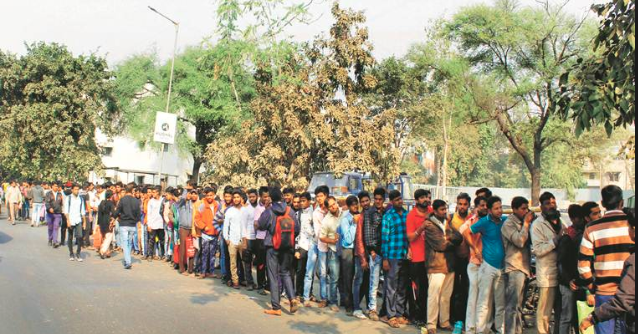 For the first time since 1993-94, the actual size of India’s male workforce, or men who are working, has shrunk. Data from the NSSO’s Periodic Labour Force Survey 2017-18, reviewed by The Indian Express, account for 28.6 crore employed male in the country. This is the first instance of a drop in the male workforce that steadily swelled from 21.9 crore in 1993-94 to 30.4 crore in 2011-12 when the last NSSO survey was conducted. This suggests fewer men were employed in 2017-18 compared with five years ago.

The decline in actual numbers occurred, again for the first time since 1993-94, in both rural and urban male workforce (see chart). The slide is steeper — 6.4% — in the rural areas compared to a 4.7% setback observed in the urban sector. The yet -to-be-released PLFS report put the unemployment rate for male in urban and rural segments at 7.1 per cent and 5.8 per cent, respectively. Economists call for raising voice against suppression of data

Experts, who did not wish to be named, said the data requires deeper study, but clearly points to job losses, and fewer fresh employment opportunities.

The NSSO report, based on the PLFS conducted between July 2017 and June 2018, is yet to be released by the government. The Acting Chairperson of the National Statistical Commission P C Mohanan and another member, J V Meenakshi, quit January-end this year after the government withheld the release of the report that was approved by the commission in December 2018.

While the NSSO publishes employment rates in percentage — and not actual workforce figures — its data sets include details of populations, sex ratio, labour force participation rates, employment-to-population ratio etc. Overall, the PLFS 2017-18 reported a 6.1 per cent unemployment rate, a sharp jump from 2.2 per cent reported in 2011-12.