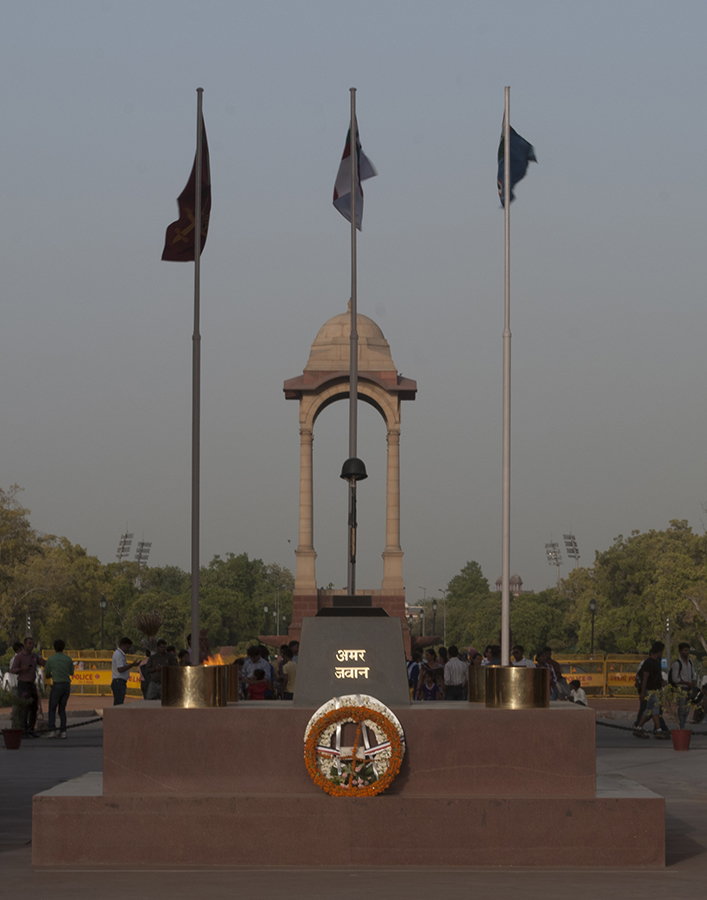 NEW DELHI, May 27: The “inverted rifle and the helmet,” the symbol of the fallen soldiers who paid down their lives in the 1971 war with Pakistan that ended with the creation of Bangladesh, was on Friday moved away from India gate to the national War Memorial a few hundred metres away.

Friday’s ceremony followed the “merger” of the “Amar Jawan Jyoti” at the India gate with the Immortal Flame at the National War Memorial, which was inaugurated by the prime minister Narendra Modi just before the Republic Day celebrations in January.

In a ceremony headed by the Chief of Integrated Defence to the Chairman, Chiefs of Staff Committee (CISC), Air Marshal BR Krishna, moved the inverted rifle and the helmet, a memorial to the soldiers who laid their lives in the 1971 war, was moved from India Gate to the National War Memorial. It was the first time in 50 years, since the memorial was established after India’s victory over Pakistan in 1971that the eternal flame was extinguished from under the India Gate which itself is a memorial to the Indian soldiers who died during World War 1 and other military campaigns till 1931.

The National War Memorial has been built over a 40-acre area close to India Gate, and has names of over 26,000 Indian soldiers who have laid down their lives in various wars and operations for the country since Independence.

“The inverted rifle and helmet, which was the symbol of Fallen Soldiers of 1971 War, moved to Param Yodha Sthal at National War Memorial and installed the same in the midst of Busts of Param Vir Chakra Awardees,” the Defence Ministry said in a statement Friday. It added that with this ceremony, “the integration of the Memorial of Fallen Soldiers of 1971 war with the National War Memorial has been completed.”

As part of the ceremony, a final salute was given and CISC offered a wreath at India Gate, the statement read, adding that after this, “the Inverted Rifle and Helmet was removed and carried in a ceremonial vehicle to the Param Yodha Sthal and installed at a newly created monument.” The CISC was accompanied by Adjutant General equivalents from the Army, the Navy and the Air Force.

The government has been promoting the National War Memorial that came up in 2019, which has not seen as great a footfall as was expected. In January, when the eternal flame was “merged”, the defence ministry sources had stated that it was to integrate the war memorials, as earlier politicians and visiting dignitaries had to pay their respect at two different places, and once the war memorial commemorating all fallen soldiers of Independent India was built, a separate memorial for the soldiers who died in the 1971 war was not needed.

The memorial under India Gate was inaugurated by the then Prime Minister Indira Gandhi, a month after Pakistani forces had surrendered on December 16. However, since then, it had become a symbol of the country’s eternal gratitude to all the soldiers who lost their lives for the country.

The Amar Jawan Jyoti memorial had included a black marble plinth with an inverted L1A1 self-loading rifle with a bayonet, topped by a war helmet, which acts as the tomb of the “unknown soldier,” and four urns with burners, one or all of which were always lit constituting the eternal flame.