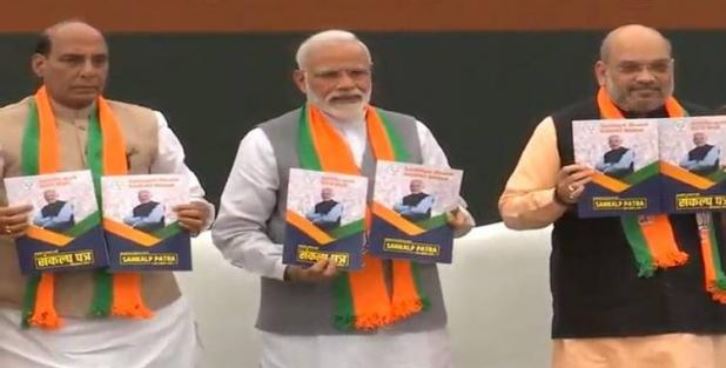 BJP’s “Sankalp Patra” has potential to transform India into a Developed Nation, if implemented as promised.

BJP’s “Sankalp Patra” has potential to transform India into a Developed Nation, if implemented as promised.

BJP announced its “Sankalp Patra” for 2019 General Election. The core focus of BJP in manifesto remains National Security, Welfare of Farmers & Poor and Infrastructure Development. The present NDA Government has successfully implemented many of their promises made in their 2014 manifesto. The 2014 manifesto of BJP represented hope for a country haunted by corruption, policy paralysis and terrorism. The Modi Government has successfully dealt with the issues of corruption, terrorism and policy implementation. The top ministers of Modi Government have not been found to be involved in any corrupt dealings. There has not been a single terrorist attack in India, excluding Jammu & Kashmir in last five years. Many major policy decisions like demonetisation and GST, demonstrate the Modi Government’s political will to reform and develop India.  The 2019 Manifesto of BJP is continuation of developmental work under taken in the year 2014.

India has two hostile enemy nations in its neighbourhood, national security of India remains the issue of paramount importance. The 2019 manifesto of BJP emphasises on Zero-Tolerance to terrorism, speeding up the purchase of defence equipment and weapons, self-reliance in defence sector, modernisation of police forces, measures to stop infiltration, border and coastal security, abrogation of Article 370 and annulling Article 35A. This very clearly communicates BJP’s commitment for national security.

The agricultural sector remains of utmost importance for India. Apart from ensuring food security, it contributes about 17% to economy. Agriculture also employs more than 50% of India’s working population. The BJP 2019 manifesto commits Rs. 25,00,000 Crore in improving productivity of farm sector. Also, it commits interest free loan up to Rs. 1 Lac for small farmers and a pension for small farmers reaching the age of 60 years. One of the major development promised in the manifesto is Village Storage Scheme that will give the farmers opportunity to store their produce and sell them at remunerative price. The manifesto also commits digitisation of land records across India, this will provide land holders greater security by title guarantee.

The BJP 2019 manifesto promises a house to every family by 2022, piped water connection by 2024, high speed optical fibre network to every gram panchayat by 2022, a massive rural road up gradation program and   100% disposal of liquid waste water and reuse of waste water. The manifesto also commits investment of Rs. 100,00,000 Crore in the area of infrastructure, this investment in infrastructure will flood the Indian economy will money and will provide greater liquidity with infrastructure to boost the Make in India initiative. The major Government expenditure in the area of farm and infrastructure sector aligned with good governance and policies will boost the GDP of the country by a great margin, paving way to achieve sustainable GDP growth with low levels of inflation.

The BJP 2019 manifesto promises to give collateral-free credit up to Rs. 50 lakh for young entrepreneurs. It also commits to provide Mudra loans to small businesses, up to 30 Crore beneficiaries. Also, Rs. 20,000 Crore has been committed for ‘Seed Startup Fund’. All these along with strong employment opportunities from organised as well as unorganised sector will provide massive employment boost to the Indian economy. Initiatives like education for all, skill development, health schemes and women empowerment has the potential to bring down the number of people below poverty line by a substantial margin, with BJP committing to bring it down in a single digit number.

Considering above facts, the manifesto appears to be very promising and developmental with the potential to transform the nation in to a developed one. It provides ample opportunity for employment, better environment for businesses and small entrepreneurs. It also promises  better education, better health care and better standard of living for the under privileged citizens. The best part of the “Sankalp Patra” is that, it is not divisive and it talks about inclusive development of all the countryman.