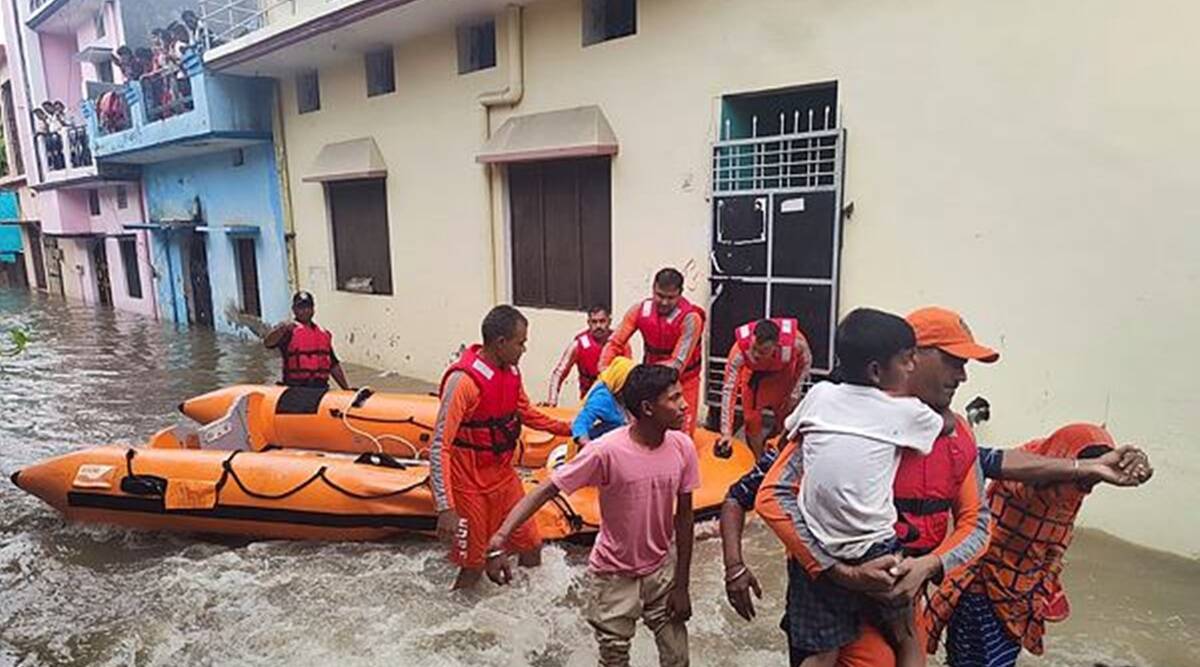 NEW DELHI, Oct 19: The Himalayan state of Uttarakhand, the land of the holy “chaar dham,” continued to be battered by the incessant heavy rainfall for the third day on Tuesday causing at least 34 deaths and leaving the authorities apprehensive of much heavier casualty of the people who may be trapped under debris or swept away in the flooded areas.

“Prime Minister and Home Minister have been briefed on the situation. Houses, bridges etc. have been damaged. Three (Army) helicopters to be deployed for rescue operations,” Chief Minister Pushkar Singh Dhami said. “So far 34 people have died and five are missing. ₹ 4 lakh compensation will be given to the families of the deceased. Those who lost their houses will be given ₹ 1.9 lakh. All possible help to be extended to those who lost their livestock,” he said.

The Chief Minister who, with Education Minister Dhan Singh Rawat conducted an aerial survey, also told reporters damage had been done to farmers’ crops and fields. He said the prime minster spoke to him to take stock of the situation.

The weather office’s predictions for the next couple of days, however, brought great relief to the authorities as it forecast of “significant reduction in rainfall activity over Uttarakhand from today” with only “isolated to scattered” showers. The rains have led to scenes of chaos and disaster across the hilly state where visuals show of roads turned into rivers, buildings flooded and submerged, many of the bridges destroyed and rivers overflowing.

Picturesque Nainital was completely cut off from the rest of the state after landslides blocked all the three access roads to the tourist town. The iconic Nainital Lake has started overflowing after more than 500mm of rain in 24 hours as water levels surged to a record high. Visuals emerging from the flooded areas show water rushing into nearby houses and streets. The famous Mall Road and Naina Devi temple have been flooded, and a hostel was damaged by landslides. More visuals shared by local people showed Army personnel braving the currents and forming a human chain to rescue stranded shopkeepers. A cloudburst over the village of Ramgarh in Nainital this morning injured some people.

Roads to Kaladhungi, Haldwani and Bhawali have also been closed by debris from landslides, media reports said. Eleven deaths were reported on Tuesday including seven people killed in house collapse incidents in the Mukteshwar and Khairna areas of Nainital and one person was swept away in Udham Singh Nagar. Five deaths were reported on Monday, including three labourers from Nepal who were staying near Lansdowne when they were buried alive by rubble flowing down from a field above. The two other deaths from Monday came after a house collapsed in Champawat district, where an under-construction bridge (over the Chalthi river) has been washed away due to a rise in water levels.

Apart from the state and national disaster response forces, the Army has also been called to action, with three Army helicopters set to join rescue and relief efforts. Two will be sent to the Nainital region and the third to Garhwal to aid in rescue of stranded people. A video also presented a scarier scene showing the collapse of a bridge. The 50 seconds video showed the crack in the bridge widens and slowly breaks up the structure, driven by the force of the flooded river.

It wasn’t just people who were left stranded and frightened by the floods and the landslides; a video emerged showing a lone elephant battling against the rushing floodwaters of the Gaula river after getting trapped on a tiny piece of land in the middle of the water body. “We got information about an elephant stuck on an island in a river. A team was sent to the spot and rescued him. He has been sent to the forest and we are keeping a track of his movements,” Sandeep Kumar, the Divisional Forest Officer (DFO) said.

As the state battles to regain a measure of control, the operation of vehicles to Himalayan temples has been temporarily suspended. In addition, passenger vehicles cannot cross the bridge over the Chandrabhaga river or ford the Tapovan, Lakshman Jhoola and Muni-ki-Reti Bhadrakali barriers.

The Badrinath National Highway in Chamoli district has been completely blocked due to debris at seven places following incessant rains in the last 48 hours, the district administration said today. As a precautionary measure, the Badrinath Char Dham Yatra has been halted, and passengers en route to Badrinath Temple were stopped at safe places.

All schools remain closed and there is a ban on trekking, mountaineering, and camping activities in high-altitude areas, including the Nanda Devi biosphere reserve and various forest divisions.

Meanwhile, the Gujarat Chief Minister Bhupendra Patel spoke to his Uttarakhand counterpart Dhami on Tuesday regarding Gujarati pilgrims stuck there and urged him to extend all possible help to the visitors.

As per a rough estimate, around 100 pilgrims from different parts of Gujarat, who went to Uttarakhand for the Chaar Dham Yatra, were stranded following heavy rains and landslides there, Gujarat Revenue Minister Rajendra Trivedi said. Gujarat CM Patel spoke to Dhami over phone and urged him to provide necessary help to the stranded pilgrims from Gujarat. The CM also asked officials to start contacting the stranded people, an official release said. Following Patel’s instructions, the State Emergency Operations Centre (SEOC) issued a helpline number – 07923251900 – to collect and share information about the stranded pilgrims, it said.

Meanwhile, another rain-battered state Kerala experienced some respite on Tuesday as heavy rains subsided. The shutters of Idukki reservoir’s Cherothoni dam — one of the largest in Asia — were opened. Sirens warned people downstream and around 60 families evacuated from low lying areas. Shutters to several dams across the state — Idamalayar, Kakki and Sholayar — were opened since yesterday as Kerala struggled with excessive rainfall.

Since Monday, many reservoirs reached the red alert mark after the unusual, intense rainfall — a departure of 135 per cent from normal rainfall from 1st October till now. The expected rainfall for October till now was around 192.7 mm, but Kerala received 453.5 mm instead

More intense rains — unusual in October — have been predicted for the next two days. Twelve districts — all except Kannur and Kasaragod — are on orange alert on Thursday also. Orange alerts, the second highest level, indicate very heavy rainfall.