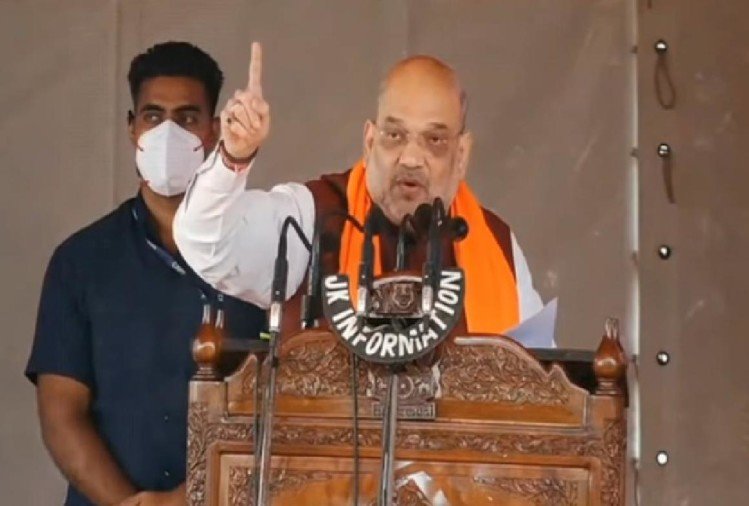 NEW DELHI, Oct 25: In a daring move, the union home minister Amit Shah on his maiden visit to the terrorist-infested union territory of Jammu and Kashmir on Monday got the bullet-proof protection shield removed in front of the public address system before delivering his speech at a public gathering in Srinagar.

Lifting both his hands sky-ward, Shah told the gathering that he wanted to “speak to the people directly with nothing in-between them” for which he got even the protection shield removed. “I stand like this before you. I want you also to remove all fear from your hearts,” he told the youths in the gathering.

Amit Shah was seen in videos walking onto the stage at the Sher-e-Kashmir convention centre with Jammu and Kashmir Lieutenant Governor Manoj Sinha on his toes and ordering the bulletproof shield removed. Security personnel were seen dismantling the glass cover under the Lt Governor’s supervision. Later, the Home Minister referred to it in his speech.

His gesture was to hit back the National Conference leader and Jammu Kashmir former chief minister Farooq Abdullah for suggesting that an India-Pakistan dialogue be held. “I saw in the newspaper that Farooq Sahab has advised the Government of India to hold talks with Pakistan. He’s an experienced man, who was once the chief minister, it’s his advice. But I want to tell Farooq sahab and all of you, that if there have to be talks, I will hold them with the people of my valley (Kashmir) and the youth of the valley,” Shah said while addressing the Srinagar gathering.

“Why shouldn’t I talk to you? We want to talk to you, that’s why I extended a hand of friendship with the youths of the valley,” Shah added. “I was taunted and condemned with harsh words. I want to speak before you openly, that’s why there’s no bullet proof glass or security here. I am standing before you like this,” the minister who was wearing a pheran traditionally worn by Kashmiris said. “Farooq (Abdullah) Sahab suggested we should speak to Pakistan but I want to make it clear to Farooq Sahab and to you – I will speak to the youth and the people of the Valley,” he said.

Amit Shah is on a three-day visit to Jammu and Kashmir, his first since August 2019, when he announced in parliament the scrapping of special status to Jammu and Kashmir under Article 370 and the downgrading of the state to two Union Territories. Before that, he had visited Kashmir just after taking over as Union Home Minister after the BJP retained power in 2019.

“Behind the Article 370 repeal there was only one intention – to put Kashmir, Jammu and the newly-created Ladakh on the path to development. You will see the fruits of our efforts by 2024,” said the Home Minister. Later, Amit Shah pressed on with his outreach by greeting the crowd up close.

The Home Minister’s visit comes after a series of terror attacks targeting non-civilians in Kashmir. According to government officers, the visit is meant to reassure people and send across the message that Jammu and Kashmir is safe for everyone, including for those from outside the state. Massive security arrangements have been made for the visit with 5,000 more security personal posted in the Kashmir Valley.

After arriving in Srinagar on Saturday, he met with the family of a police officer killed by terrorists earlier this year and reviewed the security situation in Kashmir. He also visited the Kheer Bhawani temple in Ganderbal and addressed a public rally. “The time for sidelining the people of Jammu has come to an end and now both Kashmir and Jammu will be developed together,” Shah said. He also offered prayers at the temple of Mata Ragnya Devi while donning a traditional Kashmiri pheran.

Earlier on Sunday, a BJP-led delegation of three displaced Kashmiri Pandit organisations called on Shah and demanded the construction of two-bedroom quarters for the migrant employees from the community recruited under the prime minister’s special recruitment programme in the Kashmir valley, besides security and an insurance coverage for them. They had also demanded the constitution of an apex committee and a welfare board for the displaced people.