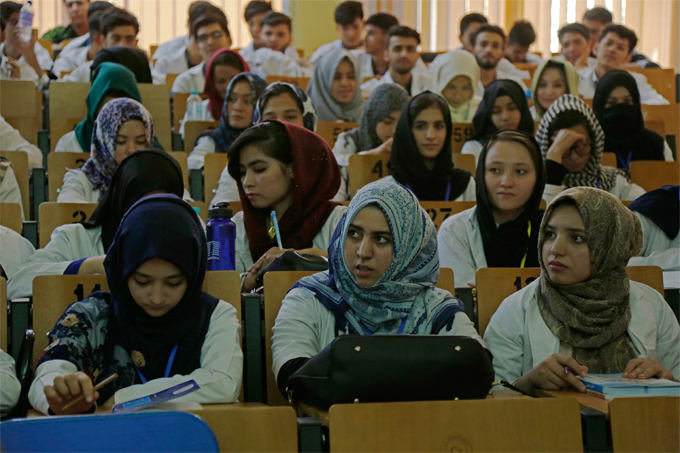 Afghanistan: Private Universities Reopen but with Segregated Classes for Men and Women 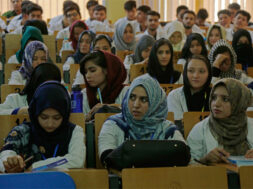 Afghanistan: Private Universities Reopen but with Segregated Classes for Men and Women

NEW DELHI, Sept 6: Even as the Taliban is struggling to form the new government, the private universities in Afghanistan resumed functioning from Monday giving a clear indication that lives of women in the Taliban regime will not be a bed of roses if not a total curtain down as it was during its previous rule before 2001.

The Taliban, which has promised a more moderate outlook including assurances of human rights, particularly those concerning women and children to satisfy the international community whose help is a must to keep the Afghanistan wheels moving, has allowed the women to resume university classes but with a lot of restrictions and total segregation from their male classmates.

The hardline Islamist group has imposed restrictions on the clothes the female students may wear, where and how they are seated in class, who can teach them, and even the length of their classes.

Some photographs claimed to be originating from inside private universities which resumed operations on Monday, reveal the ‘new normal’ for Afghan college students – divided classrooms, literally and figuratively.

A document issued by the Taliban’s education authority on Saturday prior to classes resuming on Monday, asked the women to wear an ‘abaya robe and niqab’ covering most of the head and faces, and that the classes must be segregated between the male and female students and if not possible, at least opaque curtain between the two sexes seated in the class room. There was no order for women to wear the all-enveloping ‘burqa’ but the niqab effectively covers most of the face anyway, leaving just the eyes exposed.

The document also ordered that female students should only be taught by other women. If this is not possible then “old men of good character” can fill in. “Universities are required to recruit female teachers for female students based on their facilities,” the education authority said

The decree, said Taliban, applies to private colleges and universities, which have mushroomed since their first rule ended in 2001. During that period, girls and women were mostly excluded from education because of rules regarding same-sex classrooms and the insistence they had to be accompanied by a male relative whenever they left the house.

A university professor said “it is a difficult plan – we don’t have enough female instructors or classes to segregate the girls… But the fact that they are allowing girls to go to schools and universities is a big positive step.” Girls and boys will also be segregated at primary and secondary schools, which was already common throughout deeply conservative Afghanistan.

Last month Abdul Baqi Haqqani, the acting minister for higher education, had said the Taliban “wanted to create a reasonable Islamic curriculum in line with our Islamic national and historical values and be able to compete with other countries.” Whether women can work, freely attend school and college and be able to mix with men have been some of the most pressing questions since the Taliban swept into Kabul on August 15.

August’s meeting of education officials offered a potential answer – no women were present at a meeting of elders in Kabul, although several senior Taliban officials were. University admission rates have risen over the past 20 years, particularly among women who have studied side-by-side with men and attended seminars delivered by male professors.

The Taliban – feared for their brutal first regime – has promised to be more inclusive, particularly in regards to human rights and gender equality. But promises women can also work have been viewed with skepticism too, given reports that a pregnant police woman was shot dead by Taliban have raised fears they will revert to the old system. A popular television artist had earlier reported that the Taliban had barred her from working at her TV station. A lecturer who previously worked at a city university said this showed “systematic prevention of women’s participation” and “a gap between the Taliban’s commitments and actions.”

On Sunday, a Sputnik correspondent reported, “Women started buying head and body coverings out of fear that the Taliban would hunt down and beat them up if they were seen without hijabs or burqas, something similar to what used to happen in the country in the 1990s.”

These developments came a few days after dozens of Afghan women held protests in Herat demanding rights and female representation in the government formation after the Taliban took control of the war-ravaged country. Protestors were carrying banners with slogans against the exclusion of women from the country’s political system under the regime of the Taliban, Tolo News reported.

Elsewhere, even as the Taliban kept repeating is claims that the resistance from the Pnajshir valley has ended and the leaders of the National Resistance Front have escaped to the neighbouring Tajikistan, its senior leader on Monday called for a “national uprising” against the Taliban.

Taliban spokesman Zabihullah Mujahid on Monday claimed that he had been told that Ahmad Massoud, who leads the National Resistance Front of Afghanistan (NRFA), and former vice president Amrullah Saleh have escaped to neighbouring Tajikistan. Massoud, who in a Twitter message said he was safe, but gave no details.

In an audio message sent to media, Massoud said: “Wherever you are, inside or outside, I call on you to begin a national uprising for the dignity, freedom and prosperity of our country.” Ali Maisam Nazary, head of foreign relations at NRFA, said the Taliban’s claim of victory was false and opposition forces continued to fight. “The NRF forces are present in all strategic positions across the valley to continue the fight,” he said on his Facebook page.

The Taliban said it would welcome German investment in Afghanistan and help in areas including humanitarian aid, health care, education and infrastructure, the group’s spokesman said. “The German government could encourage its entrepreneurs to come and invest in our country,” Zabihullah Mujahid said. Germany, acting in concert with the European Union, has laid out conditions to resume a diplomatic presence in Kabul and unfreeze development aid, urging the Taliban to respect human rights, particularly those of women.