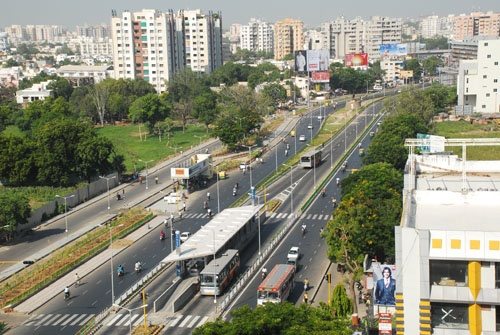 Walk the Talk on Gujarat’s Development – North Indians of Ahmedabad!

Walk the Talk on Gujarat’s Development – North Indians of Ahmedabad!

Ahmedabad, April 10: Half the number of voters hailing from North Indian families whom REVOI reached out in different areas of Ahmedabad say that they will vote for BJP in the forthcoming Lok Sabha elections as Gujarat goes to vote on April 23.

A take on Gujarat’s development issues by Ahmedabad’s North Indian localities derives an insight towards a better comparison of Gujarat’s development with other northern states. Development issues like job opportunities, infrastructure, freedom, education, electricity and water supply were the key areas on which REVOI has got into views of people who reside within the state but belong to different natives.

Despite of the diversities in profession, cultures and age groups, North Indians of Ahmedabad have interestingly shared similar opinions about key areas of development in Gujarat while compared to their natives. This has raised a bar of development for the forthcoming Government of India and Gujarat as well. Each one of them have considered Gujarat a better state in terms of standard of living, safety and economic freedom at the most.

Aarti, a 55 year old housewife has talked to REVOI on her views regarding the development. She belongs from Udaipur – Rajasthan and lives in Gujarat since 33 years.

She says there are quite a lot job opportunities in Ahmedabad and as Udaipur is a small city we see minimal development there. Any business in Gujarat can get a boom sooner or later as compared to Udaipur.

Economic Freedom dwells here better. Gujarat has a much higher standard of living while compared to Udaipur as Udaipur is merely a tourist spot while Gujarat is a state with better education and scope of job linkages in various fields.

Talking on safety matters she said that Gujarat was not safe earlier as there have been major riots witnessed and we did not allow our children to get into Muslim areas.

We use to feel very unsafe then but now Gujarat can be considered as a safe state, not only for girls but even in terms of criminal affairs. Udaipur is also a safe city as we have been brought up there amongst many Muslim communities and there are still many Muslim friends there. There is Right to Equality, Freedom of Expression and Gender Equality better established in Gujarat than in Rajasthan. She proactively said, “I love Ahmedabad and after witnessing the development of Gujarat in Modi’s rule, I will definitely vote for BJP.”

Yash, a 21 year old student who is perusing Hotel Management Course in Ahmedabad is basically from a Punjabi family in Haryana’s Hisar District. He lives in Gujarat since last 20 years. He said that there are minimal job opportunities for students of hotel management in Gujarat as it is a dry state.

Talking about standard of living it can be said that Gujarat has better and cheaper consumption of resources and they are easily accessible, property rates are also cheaper here. As PM Narendra Modi belongs from Gujarat, Gujarat has been witnessed as very liberal in terms of Economic Freedom and that is the real reason for this state to pace high towards development.

There is no Right to Equality in Haryana as there are many casts like Jats who practice racism at higher level which is never seen in Gujarat. It is also a safer state and Education hub while compared to Haryana. “Looking at the development of Gujarat, I will vote for BJP.”

Manish Khatwa is 24 year old and comes long from Calcutta, West Bengal in Gujarat to study Hotel Management. He has lives in Gujarat since last five years and talked to REVOI on various development issues in Gujarat while compared to West Bengal.

Talking on Job opportunities he said that our profession demands need for bars but as this is a dry state, there is a lack of job opportunities here but in West Bengal our profession can get a better kick start. Gujarat has improved a lot in terms of standard of living while compared to Calcutta and it is definitely more peaceful and luxurious here.

It was really a relief to witness safety of women in Gujarat. Girls can easily stay out till late nights here and they return home safely unlike Calcutta. Also, there is minimal women empowerment prevalent in Calcutta while compared to Gujarat. He further conclusively said, “I have witnessed better safety, Electricity and Water Supply in Gujarat in the BJP rule while compared to Calcutta, I will vote for BJP.”

Surjit Singh, an Agriculturist basically from Mung in Pakistan. At the age of 62 he considers Ahmedabad Gujarat much better than Mung. While talking on development in Gujarat he said that Gujarat is one of most developed state prosperous with best resources and varied range of job opportunities.

He further said that his family has lived in Gujarat since a long time and they consider Gujarat as the safest and most culturally secured state of the country. Considering the safety issues he said that any girl can travel even at midnight and still keep safe here.

Talking on Education, Mr. Singh said that there are Universities and colleges for every field here and in coming five years Gujarat will beat Kerala very soon. He precisely said that since BJP has come in power water supply and electricity issues have been solved at a great extent, it is difficult to remember about power cuts anymore and hence because of development at such a pace it is necessary to vote for BJP again.

Lilaram Vidani is a cloth merchant and has been in Gujarat since 50 years. He is basically from Jaipur in Rajasthan and is 65 year old. While talking to REVOI on development issues he came very positive and said that anyone would definitely enjoy living in Gujarat than any other state as Gujarat is booming in all the sectors, be it business or services, it is easier to find a good job here and survive with cheaper and accessible resources.

Gujarat has set an example for safety of women in India and hence other states should get inspired from Gujarat to deliver such secure and prosperous atmosphere. It is necessary to re- elect BJP to keep development steady.

Multani Singh, a student natively from Jalandhar in Punjab is of 22 years and has shared his opinions on development issues in Gujarat while compared to Punjab. He said that being a fresher he looks forward to numerous job opportunities in Gujarat as it is a hub of Textile Industries and Ahmedabad is quite famous for that.

When asked about woman empowerment and safety of women in Gujarat he said that women are quite independent in Gujarat and with an open minded mindset people here women are giving a neck to neck completion to men in every field. Gujarat is booming in IT sectors, Engineering and Technology as there are various projects going on in Gujarat to open doors for better employment opportunities.In coming Loksabha Elections he wishes to support the BJP Government.

Akshay Chanchavat is from Udaipur – Rajasthan and works as a Software Developer in Ahmedabad since last five years. He admires Gujarat for its rapid growth while compared to Rajasthan as according to him Gujarat is pacing high in IT sector and die to its industrial development there are is a better standard of living here.

Udaipur seems smaller and lacks growth of infrastructure as well but standard of living of Rajasthan and Gujarat does not seem to be much different. Gujarat has a better economic freedom as any new venture would boom better in Gujarat than in Rajasthan.

It is noted fact that Rajasthan does face Gender equality issues which are not prominent in Gujarat but considering the recent span of years, Rajasthan is overcoming it. He further remarked that there are many electricity and water supply issues in Rajasthan and it is a major problem there. This does not seem to be an issue in Modi’s Gujarat and hence he should be re- elected again.

Geeta Chakrovarty from Bangladesh but native is Tripura. She is a 45 year old Accountant immigrated to Gujarat since a long time. Talking to REVOI she said there is are very less jobs in Tripura while compared to Gujarat.

We have our own business here and hence I consider Gujarat better in terms of Economic Freedom way more than Tripura. There is a lot of politics in Tripura, be it for business or for jobs but Gujarat is pacing high towards Right to Equality but Tripura is safer for women than Gujarat though and also better in woman empowerment.

Even though Gujarat is a more developed state, Education is 99.9% in Tripura as from rich to poor all are equally provided with right education that seems to be deprived in few villages of Gujarat. But looking forward to a better development she said, “I will vote for BJP.”

Suresh B Rao is from Pratapgadh Jilla in Uttar Pradesh and is 32 year old. He works on contract bases as an electrician and lives in Gujarat since last 25 years.  When asked about job opportunities in Gujarat, Suresh said that it is very difficult to get job for people from Uttar Pradesh in Gujarat as there is lack of education there.

In UP mostly all are occupied in labor works as they are not educated but there are better opportunities in Gujarat as education is important here. There are never any electricity or water supply issues in Gujarat like in Uttar Pradesh and women are safest in the state of Gujarat which is still a major concern in Uttar Pradesh.

According to him Gujarat has better scope of jobs for security forces. Talking on elections he said that he shall vote for BJP and wish to reelect the present Prime Minister again.

Gujarat has always excelled in all the key areas of development. A report from IndiaSpend had mentioned that Gujarat topped the list of five states that offer maximum economic freedom while Maharashtra was ranked second. Telangana, placed third before Himachal Pradesh and Haryana, was the only state without a BJP government in this category.