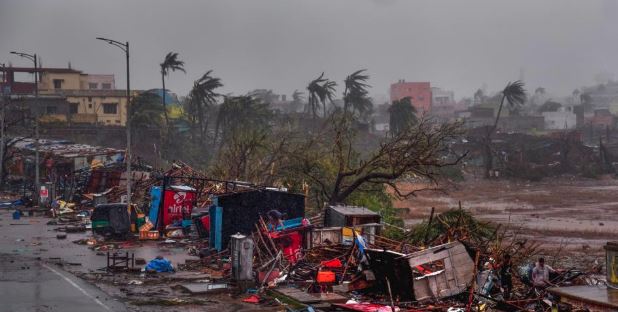 Pilgrim town Puri in Orissa has largely been affected by the onslaught of cyclone fani. The control room of the state functioning from Bhubaneshwar is yet to establish contact with many affected districts. The Biju Patnaik airport is likely to be made functional this afternoon. But there was no word on commencement of commercial flight operations.

Puri has witnessed such a destruction level that it was difficult to shift locations as powerlines, trees, and boundary walls falling flat everywhere. People were not able to get information about their loved ones due to the failure of communication networks. Four-wheelers could get up to the town but could not proceed inside.

The fishing community was also deeply affected as fishing boats were overturned on the houses. There were administrations providing prepositioned ready to eat food to people affected by fani. It was a similar situation in the capital Bhubaneswar where lakhs of people residing in slums have been rendered homeless. Roofs of thatched houses had been blown away by the storm.

An official estimated figure of the death toll was a figure of 20.
Chief Minister Naveen Patnaik reviewed the situation  and said, “Fani had a landfall at Puri with wind speeds of over 200 kmph and gusting up to 240 kmph. It tore apart the infrastructure, especially power, telecom and water supply.”

Districts such as Puri, Khurdha, Cuttack and Nayagarh have been affected the most.