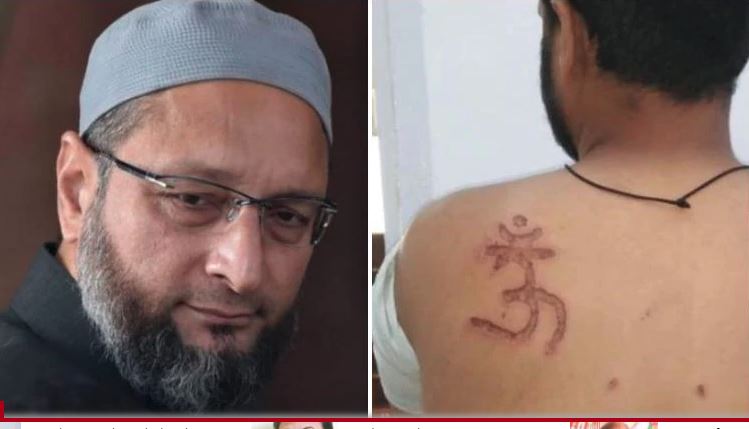 Branding someone like cattle was cruel: Owaissi on a Muslim inmate branded with Om symbol

Branding someone like cattle was cruel: Owaissi on a Muslim inmate branded with Om symbol

A day after it emerged that a Muslim undertrial in Tihar Jail was branded with an “Om” symbol on his back and was deprived from food for 2 days. All India Majlis-E-Ittehadul Muslimeen Party president Asaduddin Owaisi tweeted that branding someone like cattle was cruel, unusual and dehumanizing.

“Everyday, a more innovative way is developed to humiliate us To brand someone like cattle is cruel, unusual & dehumanising. We’re not chattel, we’re HUMAN… (Let’s not pretend there’s any other reason why Nabbir was branded with this specific symbol),” Asadduddin tweeted.

When the Muslim undertrial, Shabbir alias Nabbir, was brought before a magistrate, she found an “Om” symbol seared into his skin.

On April 12, Shabbir raised a complaint with the superintendent of jail no 4 – Rajesh Chauhan. Shabbir told Rajesh Chauhan that the induction stove in their barracks was not working properly.Incensed by the complaint, the jail official then started beating Shabbir.

Rajesh Chauhan then summoned Shabbir into his office, berating him for “trying to be a neta” and raising complaints. Behind closed doors, Rajesh Chauhan and some other jail officials beat Shabbir again. They did not stop there.

Not satisfied with the beating, Rajesh Chauhan took a metal Om symbol, heated it, and branded the Om on Shabbir’s back. Shabbir was then denied food for two days, and on April 14, Rajesh Chauhan told Shabbir that he had “converted to Hinduism as he had ‘fasted’ during Navratri”.

The case was heard by the court on April 17 when Shabbir was already scheduled to be brought to court for a hearing in the ongoing trial against him. In the courtroom, the judge asked him to narrate his story, and then she saw the branded symbol herself.